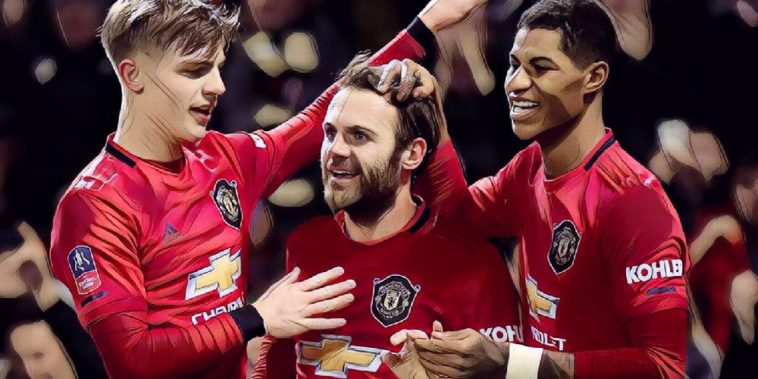 Manchester United made it through to the fourth round of the FA Cup with a laboured 1-0 win over Wolves at Old Trafford courtesy of a tidy Juan Mata finish.

With the original tie having finished goalless, the first 45 of the replay also passed by without the scoreboard operator being troubled, though there were a number of chances at either end.

Wolves thought they had opened the scoring through Pedro Neto following a poor cross-field ball from Fred, only for his strike to be ruled out by VAR for a handball in the buildup by Raul Jimenez.

After failing to have a shot on target at Molineux 10 days ago, Manchester United did manage to create some chances of their own, though the Red Devils were foiled on a couple of occasions by veteran goalkeeper John Ruddy.

Overall though, it was a disappointing game, though United eventually scored the only goal of the game after finally producing a bit of quality, Anthony Martial’s perfectly timed through ball to Juan Mata being deftly finished by the Spaniard, who dinked the ball over the advancing ‘keeper.

Speaking afterwards, Ole Gunnar Solskjaer said that he was ‘delighted’ to finally get a win over Wolves, also praising Mata’s quality, whose goal came on the back of notching a pair of assists in the 4-0 win over Norwich at the weekend.

“I think you can see it was two teams towards the end that were tired,” Solskjaer told BT Sport.

“[It was an] End to end and an open game – sometimes that doesn’t suit us.

“We’re delighted to beat Wolves finally. Juan Mata is different class. He’s got the skill, composure and even pace.”

United will face Watford or Tranmere in the fourth round, their third-round replay at Prenton Park having been postponed on Tuesday due to a waterlogged pitch.