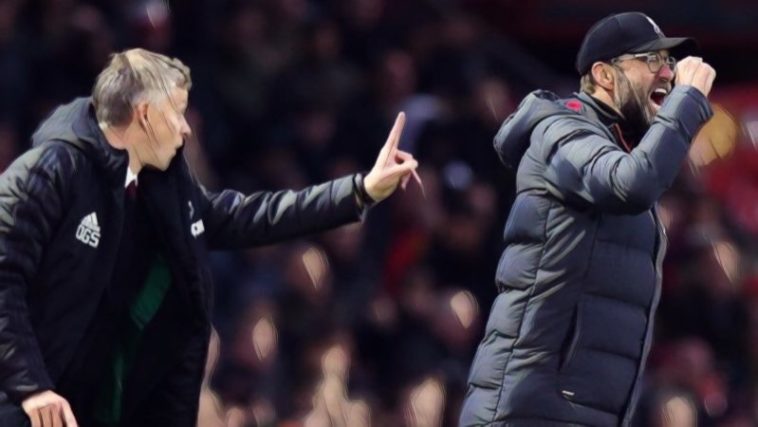 It’s a testament to the rivalry that despite the vast gulf between the two sides there remains unique anticipation and excitement when Manchester United play Liverpool.

Jurgen Klopp’s side are, in virtually every respect, superior to their counterparts. A coherent club structure combined with a well-oiled tactical system and perfectly suited squad provides a stark contrast to the mayhem and disarray that has defined Manchester United in the post-Ferguson era. Yet on the day, it was all even, as Adam Lallana’s late equalizer ensured the points were shared at Old Trafford.

Klopp unsurprisingly set up Liverpool in their traditional 4-3-3, with the only noticeable change being the inclusion of Divock Origi, who replaced an injured Mohammed Salah. It was Ole Gunnar Solskjaer, who has failed to display significant ingenuity in his tenure thus far, who surprised many with his starting eleven, deviating from his preferred 4-2-3-1 to field a 3-4-1-2.

Marcos Rojo replaced an injured Axel Tuanzebe on short notice to complete the back three, with Aaron Wan Bissaka and Ashley Young operating as the wingbacks. Andreas Pereira sat behind a front two of Marcus Rashford and Daniel James, although the three frontmen routinely interchanged positions throughout the course of the game.

Aided by a sluggish Liverpool start, United’s game plan was certainly fruitful in the first half. Their aggressive pressing unsettled the visitors, and, as they have often been able to under Solskjaer, were quick to counterattack at every opportunity. Pereira took up intelligent positions in between the lines, disorienting the Liverpool defence and getting into decisive positions. His overall performance was promising, yet his decision making when getting into such areas left much to be desired.

Marcus Rashford was also intelligent with his movement, finding pockets of space out wide and receiving the ball in areas where he could quickly turn and run at the Liverpool back four. United were proactive and deserved to take the lead before halftime.

A ball passed into Origi was quickly and somewhat controversially won back by United defender Victor Lindelof,  allowing Scott McTominay to release a surging Daniel James down the right-hand side. In the middle, Rashford made a superb run that lured Joel Matip into moving closer to the ball before moving back at the last second to finish off a lovely cross from James.

It was the kind of goal that demonstrated the undeniable talent of the likes of Rashford and James and would make United fans frustrated as to why the pace, movement, and finishing of their players are not better utilized. Nevertheless, it was sufficient for the hosts to head into halftime with the lead.

Yet the first half was far from doom and gloom for Liverpool. Georginio Wijnaldum and the rest of the Anfield outfit’s midfield trio utterly dominated Scott McTominay and Fred. With the wingbacks playing very wide and deep, there was ample space for Liverpool just ahead of the United backline, space that United seemed resigned to cede with just two players trying to shield it. Without some type of change, it seemed likely that Liverpool’s equalizer was not far away.

Yet in the second half, Solskjaer curtailed his side’s attacking instincts and gave the team a more solid shape. Instructing Pereira and James to join the midfield instead of pushing up and press, United often resembled a 5-4-1, clogging the gaps in the middle that Liverpool had been exploiting in the first half.

Up until the 85th minute, this relatively simple tactical adjustment appeared a masterstroke from Solskjaer. Liverpool were stifled, seemingly devoid of any imagination or creativity that could break down United’s defense. While the home team had little sight of the ball, their organized back three dealt with Liverpool’s crosses and set pieces with ease, and it appeared that the visitors lacked another mode of attack.

Yet a momentary lapse in concentration was all Liverpool needed, as Andrew Robertson was allowed to take a more advanced position and supply substitute Adam Lallana with a tap in. Adding insult to injury, it was Marcos Rojo, the man who nearly joined Everton on deadline day and was only starting due to a last-minute injury to Axel Tuanzebe, who left Lallana unmarked in the box and allowed Liverpool to salvage a point.

Manchester United can’t be too disappointed with a draw given the gulf between the two teams. While Solskjaer lamented that the game was two points dropped, it was telling that in one of United’s best performances in the season, they appear incapable of breaking down a defense and creating space by themselves.

For all his tactical changes, Solskjaer still seems to have failed to instill in United a capacity to create chances consistently without relying on counterattacks. His lack of a clear philosophy is showing, and only time will tell how long it can keep him at the helm.

A lack of creativity can also be leveled at Liverpool, who remain the league leaders despite delivering an average performance. In Lallana, Keita, and Oxlade Chamberlain, they have players who can potentially alleviate that issue. Lallana, in particular, showed how he can add to Liverpool’s squad with his quick passing and ability to make late, angled runs into the box.

Crucially, Liverpool are able to consistently grind out results despite their poor performances, which is indicative of their quality and understanding of their system and each other. It’s United, who for all their resolve and vigor, need to be cognizant of their apparent deficiencies and the long road back to the Premier League elite.