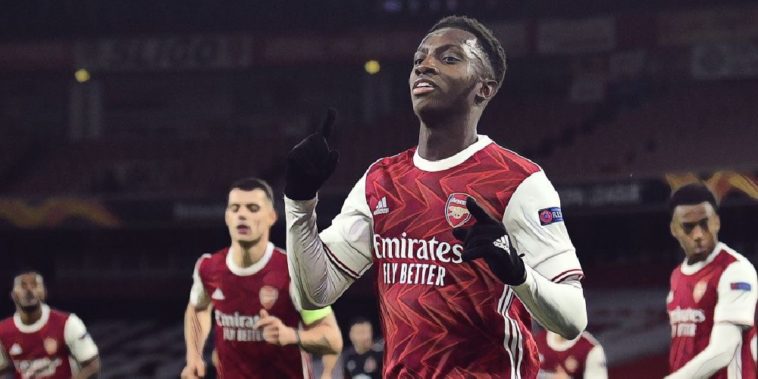 Arsenal are said to be looking to offload six players in a bid to raise funds as the club prepare for a ‘busy’ summer transfer window.

Mikel Arteta’s first full season in charge has proven disappointing with the Gunners having failed to build on last season’s FA Cup triumph, the north London side currently 10th in the Premier League and heading towards a lowest league finish since 1994/95.

Arsenal will look to overhaul their squad this summer and are anticipating a ‘busy’ window of activity, with the club keen to offload six players in a bid to hand Arteta funds to conduct his recruitment.

According to football.london, Ainsley Maitland-Niles and Eddie Nketiah will both be allowed to depart, whilst Arsenal will listen to offers for Matteo Guendouzi and Lucas Torreira with both players out on loan this season after being deemed surplus to requirements last summer.

Hector Bellerin is understood to be keen on an exit should the right opportunity arise, whilst Alexandre Lacazette could also depart with the France international entering the final year of his contract this summer. Joe Willock’s future is another that remains uncertain with the 21-year-old currently on loan at Newcastle.

Arsenal will hope the potential sales of those stars can rake in significant funds ahead of their summer recruitment, with the signing of a creative midfielder and right-back a priority for Arteta.

Arteta is reportedly keen to extend Martin Odegaard’s loan move beyond the end of the season, though reports have suggested Real Madrid view the on-loan midfielder as ‘fundamental’ to their future plans.

Inter Milan full-back Achraf Hakimi has been linked with a move to the Emirates in recent months, whilst there is a need for cover at left-back given Kieran Tierney’s injury problems since arriving from Celtic.

Securing European qualification could further boost Arsenal’s hopes of both financing deals and attracting additions for next season, though their hopes rest on success in the Europa League ahead of this week’s semi-final first leg with Villarreal.

Winning the trophy would see the north Londoners return to the Champions League for the first time since 2016/17 with either Manchester United or Roma awaiting in the final should the Gunners progress.