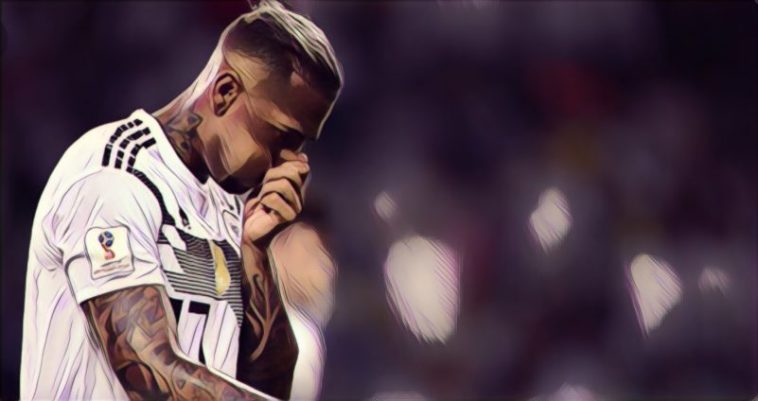 It is safe to say that three of Manchester United’s most successful players Roy Keane, Gary Neville, and Patrice Evra are not big fans of their former clubs defensive transfer target Jerome Boateng.

The Bayern Munich defender put in an erratic performance during Germany’s last gasp 2-1 win over Sweden last Saturday night, and was sent off after 82 minutes for a second bookable offence.

Manchester United have been heavily linked with a £50 million move for the 29-year-old centre-back in recent weeks, but Keane, Neville and Evra, who are all working for ITV as World Cup pundits were not one bit impressed by the performance of Boateng and his central defensive partner Chelsea’s Antonio Rudiger.

“The two centre halves will give you a heart-attack,” Keane said at halt-time.

“He’s been walking around he’s like it’s a game of Sunday league football. He’s been a disgrace, get him off.”

“Roy is absolutely right, the centre-backs have been a joke, an absolute joke.

“Boateng thinks for some reason he is (Franz) Beckenbauer, thinks he’s the player. He’s played under Pep and started to believe he is a fantastic football player.

“He has been a joke in this first half. He’s got delusions, thinks he is a player; he’s wandering forward, ambling in the game.

“The performance of the centre backs (was poor), the lack of understanding. I have never seen Germany look so naïve in games. But they got there.

Finally it was the turn of former United left-back Evra to lay into the Bayern centre-back: “He had a bad game. Sometimes you can see he plays like Beckenbauer, but tonight he had a really bad game. And actually when he was sent off, Germany played better.”