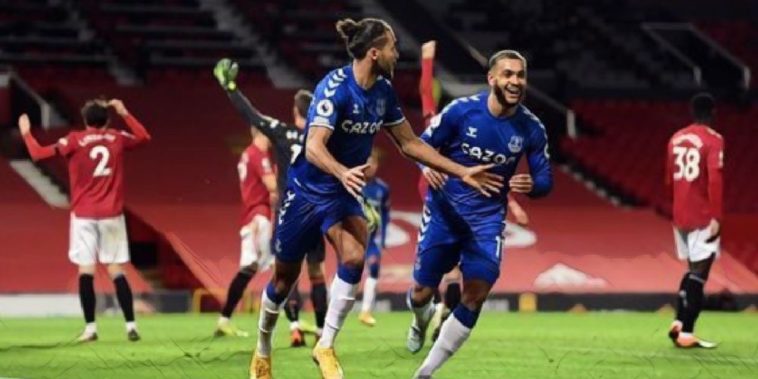 Manchester United host Everton in Saturday’s lunchtime kick-off, the hosts having enjoyed a dramatic win over Villarreal in the Champions League last time out.

Here’s everything you need to know about that meeting at Old Trafford:

The pressure is mounting on Ole Gunnar Solskjaer after a poor run of form of late, with Manchester United‘s defeat at home to Aston Villa on Saturday ensuring a third defeat in just four games in all competitions, having already slipped up against Young Boys in the Champions League and West Ham United in the Carabao Cup.

The Red Devils put in a limp Old Trafford display against Dean Smith’s impressive side, with that lacklustre performance ultimately proving costly as they succumbed to a late goal from the visitors, centre-back Kourtney Hause firing in an 88th minute header to stun the hosts.

United did then have a chance to snatch a perhaps undeserved point in stoppage time after goalscorer Hause was penalised for handball, only for the usually composed Bruno Fernandes to blaze his spot-kick over the bar, ironically after his manager had questioned his side’s recent lack of penalty decisions prior to the game.

Inevitably, a lot of the post-match talk centred on whether or not Cristiano Ronaldo should have taken the pivotal penalty instead, although that is potentially deflecting away from what was another shoddy performance from Solskjaer’s men, with continued question marks surrounding the Norwegian’s selection decisions and style of play.

The scrutiny looked to building even further in midweek as United struggled against an impressive Villarreal side in the Champions League, with Paco Alcacer deservedly firing the visitors ahead just after the interval.

Facing a third successive home defeat in all competitions, the hosts then struck back through a delightful Alex Telles strike after a well-worked free-kick routine, before Cristiano Ronaldo fired in a dramatic 95th-minute winner to secure a vital victory for his side.

That win had seen United without both Luke Shaw and Harry Maguire due to injury and the England duo remain doubts for this weekend’s clash, although fellow defender Aaron Wan-Bissaka will be available after missing Wednesday night’s encounter through suspension.

After all the negativity surrounding his appointment as manager over the summer, Rafa Benitez is proving that he is the best man for the job in leading Everton back to where they belong, having enjoyed a fine start to life on the blue side of Merseyside.

Barring their second-half collapse away at Aston Villa a few weeks ago, the Toffees have been in impressive form in the opening stages of the season, with their four wins and a draw from their first six league games leaving them in fifth place and just a point behind leaders – and bitter rivals – Liverpool.

As last season proved, a bright start ultimately means nothing if it is not maintained, with the club looking like potential top-four contenders under Carlo Ancelotti, before simply fading away after the turn of the year to finish in mid-table.

Like the Italian, Benitez’s impact may be inhibited by the threadbare nature of the current squad, although he has already proven that he can get results without some of his key men, picking up a deserved win at home to Norwich City at the weekend, despite the absence of Dominic Calvert-Lewin and fellow forward Richarlison.

Both men are likely to be absent until after the international break, as well as captain Seamus Coleman, although the club may well have found new leading lights in the form of Andros Townsend and Demarai Gray, the two summer signings having been electric of late.

Townsend – who arrived on a free transfer from Crystal Palace – already has four goals and provided three assists in his first eight games in all competitions for his new club, the latest of those strikes coming from the penalty spot in the win over the Canaries, with Abdoulaye Doucoure bagging a late second to seal the victory.

Manchester United ran out 4-0 winners when the two sides met in pre-season, although their last competitive encounter was much more evenly matched, with Everton snatching a point in the dying seconds at Old Trafford.

The home side looked to have the game wrapped up at half-time after an Edinson Cavani header and a stunning Bruno Fernandes strike gave them a deserved two goal advantage heading in at the break.

🚀 Bruno Fernandes’ strike against Everton has won the Premier League Goal of the Month for February.
pic.twitter.com/BZ69BjpuXA

The momentum quickly shifted, however, as the visitors struck twice in quick succession just after the interval, pulling one back through Abdoulaye Doucoure after David De Gea’s tame parry, before James Rodriguez – who recently departed for Qatari side Al-Rayyan – fired in to make it 2-2.

Scott McTominay then flicked in Luke Shaw’s cross after Marcus Rashford had previously gone close, before a dramatic finale saw Dominic Calvert-Lewin poke home with essentially the last kick of the game.

What channel is Man Utd v Everton on?