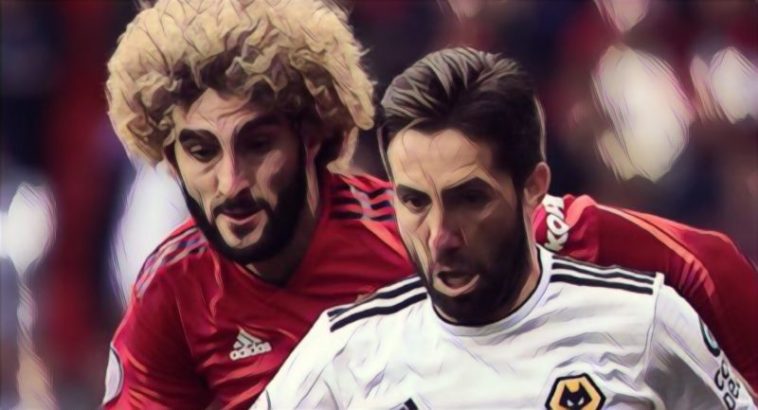 Joao Moutinho’s second-half strike cancelled out Fred’s opener as Wolves came from behind to hold Man United to a draw.

United’s three-game winning streak came to an end at the hands of newly promoted Wolves. In an even game that saw both teams willing to commit numbers to attack, United took the lead in the first half through Fred. Paul Pogba teed the Brazilian up with a delicate touch, allowing the midfielder to sweep home his first goal since his £52 million move from Shakhtar in the summer. Wolves were determined to fight back, and got their reward early in the second half, as Joao Moutinho produced a delightful finish from Raul Jiminez’s layoff. Despite both goalkeepers being called into action, there were no further goals, leaving Jose Mourinho disappointed at home yet again.

Before kickoff, Old Trafford was treated to a familiar, and welcome sight. Sir Alex Ferguson was in attendance for the first time since his brain haemorrhage scare, and both sets of fans gave him the reception he deserved. Ferguson is a giant of the game, and it was heart-warming to see him back in the stands. He is a reminder of the good old days for United.

Where to start with the enigma that is Paul Pogba? The Frenchman oscillates from the sublime to the stupid on a regular basis. The question on everyone’s mind was the same; after an excellent performance in the Champions League, how would he do on the weekend? Would he be consistent? Unfortunately for Mourinho’s men, the answer was no.

He was good in the first half, the highlight of which was his delicate, precise touch to set up Fred. But too often, he was careless in possession, trying to overcomplicate attacks. The rapport with Sanchez has not improved, and his inability to protect the ball properly led to Wolves countering and scoring. It’s hot and cold as usual.

Wolves are no ordinary promoted side

It was clear from the moment they set out to do business over the summer: Wolves were not like other promoted sides. With their ties to Jorge Mendes and the influx of Portuguese players, they were never anyone’s pick to go straight back down before the season started. Even then, Nuno will be exceptionally pleased with how they approached their games against the two Manchester clubs.

Two draws against the top two sides last season is nothing to scoff at, and Wolves, armed with experience and talent, are going to be more than a match for just about anyone in the league.

Raul Jiminez was immense throughout the game. He was constantly moving, attempting to isolate Victor Lindelof, who he had clearly identified as the weaker of the two United centre-backs. When necessary, he would pop up on the wings, helping to overload the fullbacks. He was key to Wolves’ forays forward, holding up the ball whenever possible, providing an outlet for Ruben Neves and Joao Moutinho, ensuring that United could never rest with the ball.

His clever play to tee up Moutinho for the equaliser exhibited his awareness and strength. If he could be more clinical in front of net, Wolves would stand a genuine chance of challenging for a European place.

Sanchez needs to be benched

Alexis Sanchez is currently in the running to be the most disappointing signing of the post-Sir Alex era. The Chilean has looked nothing like the force of nature he was at Arsenal. Playing in his preferred left-wing spot, ahead of Anthony Martial and Marcus Rashford in the pecking order, he has provided very little in terms of end product. The question must now be asked: is it worth delaying the growth of two young talents to give more game-time to a superstar who is clearly underperforming?

Perhaps it would be best to bring Sanchez off the bench against tiring opponents in order to help him find his form.