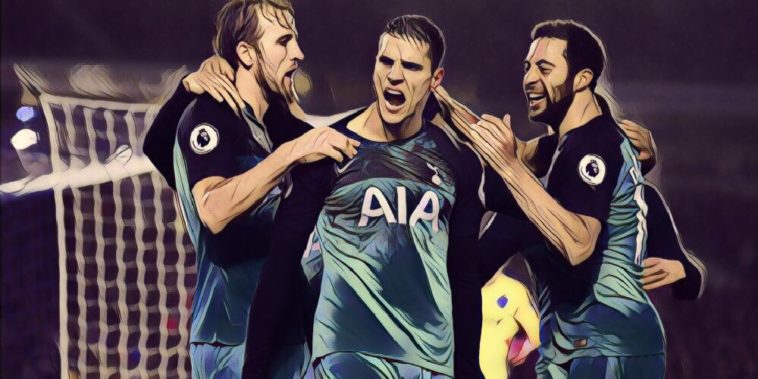 Tottenham returned to winning ways in a hard-fought victory at the Amex. A late Anthony Knockaert goal wasn’t enough to spark a comeback for Brighton after a Harry Kane penalty and a great Erik Lamela finish.

Kane dispatched his penalty with a characteristically clinical finish after a Glenn Murray handball towards the end of the first half to give Tottenham a deserved lead. Knockaert had a great chance to level the scoring but his shot was straight at 3rd-choice Spurs keeper Paulo Gazzaniga, starting in the absence of Hugo Lloris and Michel Vorm.

Lamela extended the lead in the 75th minute after a great Tottenham move, with Danny Rose putting the ball on the spot and the Argentine slotting coolly home. Knockaert did get his goal in the 93rd minute after a quick counter attack and he curled one into the far corner, but Spurs took the win.

Here are five things we learned from the game.

There has been countless talk in the press about Kane and his dip in form, associating it with fatigue following his World Cup, Premier League and more recent international duties, claiming he hasn’t had enough of a rest. The England striker put those claims to bed with a tireless display against Brighton.

He had a very quiet first half other than his penalty goal, but came to life in the second half, collecting the ball and linking play as he does so well. It was towards the end of the game he showed his energy, going on a few mazy runs showcasing his strength, and was unlucky not to grab another couple of goals from some great chances he fashioned for himself.

Promising signs for Harry in the next few games.

This is something we’ve been learning all season – Tottenham have only managed one clean sheet all season, the 3-0 win at Old Trafford, no less. It’s been a problem they’ve suffered with and the part of their game they need to address most urgently. Conceding late against Inter Milan cost them a crucial Champions League group stage win and when Knockaert scored late on fans were instantly nervous about conceding another.

In order to reach the dizzying heights Spurs should be aiming for, they need to tighten up defensively and stop conceding late goals. With upcoming fixtures against Huddersfield, Cardiff and West Ham (the Barcelona game aside), Tottenham will hope to be able to sort out their defence and get back to winning ways.

Brighton haven’t had a stunning start to the season but it certainly could’ve been worse. A win against Manchester United will be the obvious highlight, with draws against Fulham and Southampton and only narrowly losing to in-form Watford, Liverpool and Tottenham.

Unlike Spurs, Brighton are defensively solid, and they defended very well for the first 42 minutes, giving Tottenham very little to work with. They threatened on the counter attack too. Whilst not an exciting style, it is effective and should earn Brighton some vital points as the season wears on.

Gazzaniga can be Tottenham’s no. 2

With Lloris and Vorm both out, Tottenham’s goalkeeping troubles seemed to have been compounded, with 3rd and 4th choice keepers, Paulo Gazzaniga and Alfie Whiteman respectively, being called up to the Premier League squad against Brighton. This worried some fans but it turned out they had no need to be.

The Argentine goalkeeper, who played for Mauricio Pochettino at Southampton and has had some sporadic opportunities in a Spurs shirt – stepped up well and was very unlucky not to get a clean sheet. He saved Knockaert’s golden chance and was solid when catching crosses and communicating with his defenders.

He could do nothing to stop the goal and looked far more assured than Vorm who has made some mistakes in recent games. Gazzaniga could step up to take the no. 2 spot off Vorm if this performance is anything to go by.

Erik Lamela arrived for £30million following the sale of Gareth Bale in 2013 for a then-club-record fee. He didn’t stand out much and didn’t make much of an impact in his first few seasons, popping up occasionally with shows of promise – he scored a rabona from outside of the box in the 2014/15 Europa League campaign, but made no other significant impact.

Finally, five years later, he is looking like the real deal. After a hip injury that ruled him out for a year, the Argentine is looking fit, strong and eager to impress, and this is translating into goal contributions – 4 in 4 for Lamela after his goal against Brighton 2 assists and 2 goals. If he can keep up this kind of form he will cement himself as a crucial player in this Spurs side and live up to his big potential.