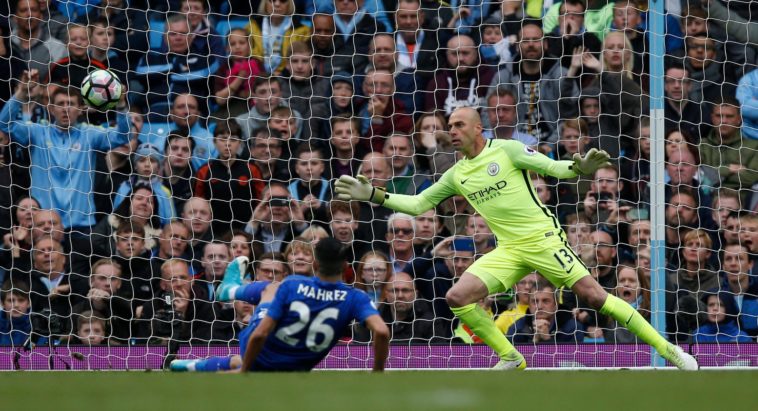 Manchester City remained on course for a Champions League place with a hard fought victory over Leicester, in a game littered with controversy.

Riyad Mahrez missed a chance to possibly salvage a draw when his penalty was disallowed after it struck him twice, before flying into the net.

Pep Guardiola’s men hung on for all three points as they close in on a top four finish.

Man City were dominant in the first half against a Foxes side with little to play for. The Citizens were unable to craft too many opportunities in the opening half hour, with Leicester missing their two first choice centre-backs.

What is the offside rule?

However, controversy struck on 29 minutes when David Silva’s miss-hit shot found the net but Leicester were incensed it was allowed. Raheem Sterling, who was in an offside position, hooked his leg at the ball but made no contact.

In the laws of the game, a player only has to be interfering with play to be active and the Englishman certainly was.

However the goal stood and it soon got worse when Gabriel Jesus tucked away a penalty to double the lead, after Leroy Sane had been taken out by a silly challenge from Yohan Benalouane.

The Champions League chasers were in full control but were shocked by a bolt from the blue as Shinji Okazaki acrobatically volleyed past Willy Caballero to give the outgoing Champions hope, on 42 minutes.

Leicester started the second half with intent whilst the home side were unrecognisable from their first half performance.

The Foxes looked dangerous on the counter with Ben Chilwell providing the most problems but they were unable to test Caballero.

The match was very stop start with fouls and injuries a common theme culminating in the second controversial moment of the match.

Fernandinho appeared to elbow Marc Albrighton whilst the Leicester wide man attempted to skip away from the Brazilian. Intentionally or not, Albrighton was caught heavily and sported a distinctive painful looking blow.

Despite seeing the incident, referee Robert Madley failed to punish Fernandinho at all.

And then controversy struck again when Leicester were awarded a penalty. Gael Clichy tripped the skillful Mahrez but replays showed it happened outside the box.

Mahrez took responsibility of the penalty himself and thought he had equalised for the away side, only for Madley to chalk it off and give Man City a free-kick, after spotting the ball had hit the Algerian’s right ankle.

Madley was correct to disallow the goal, however it was desperately unlucky for Leicester. Perhaps a rule change needs to be implemented to allow a penalty take to retake if the ball finds the net but hits them twice.

Undeterred, Leicester looked for a leveller but Jamie Vardy could only flick wide whilst a succession of corners, free-kicks, and crosses couldn’t conjure an equaliser.

99 minutes were on the clock when the full time whistle blew and Manchester City just about held on, in a pulsating clash which raised a number of talking points, and Leicester probably feeling very hard done by.

With only West Brom and Watford to play, City look nailed on for Champions League qualification next season.