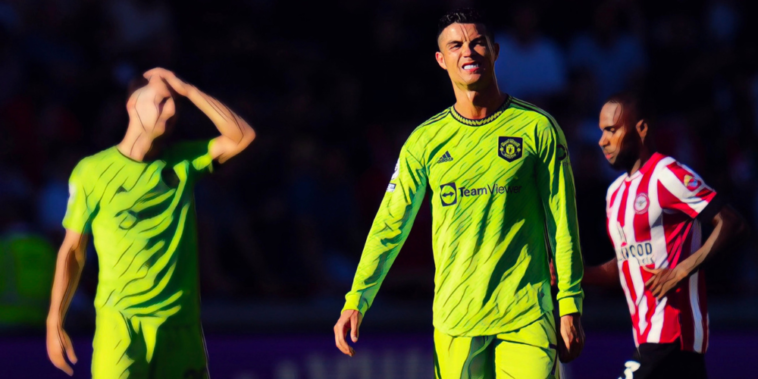 Manchester United are growing ‘increasingly frustrated’ at Cristiano Ronaldo’s bad attitude and are considering sanctioning the sale of the unsettled forward.

Ronaldo wants to leave United this summer and has made clear his desire for an exit, but has so far seen several clubs distance themselves from a move.

The 37-year-old returned to the Red Devils’ starting side for the 4-0 defeat at Brentford on Saturday, but failed to applaud the away fans following the full-time whistle and did not acknowledge Erik ten Hag as he made his way down the tunnel.

The full post-match video of Ronaldo. He starts to go over to the #mufc travelling fans and then turns away pic.twitter.com/ivKghiGNvw

The Times are reporting that Ronaldo’s increasingly bad attitude is leading to the club reassessing their stance on his future, having insisted the five-time Ballon d’Or winner is not for sale.

Senior officials have now questioned the benefit of keeping Ronaldo, given his clear determination to leave and the negative atmosphere his demeanour is creating at the club.

Ronaldo scored 24 goals in all competitions last season, but the Red Devils’ failure to secure a top four finish has led to his desire to leave for a Champions League club.

He has one year remaining on the lucrative contract he signed when joining from Juventus last summer and the club could face a significant financial hit to remove Ronaldo from their plans, given a lack of credible interest from European clubs.

Ronaldo’s future has been an unwanted sideshow during the early weeks of Ten Hag’s reign, which has began in disastrous fashion following back-to-back defeats which leave United bottom of the Premier League for the first since August 1992.