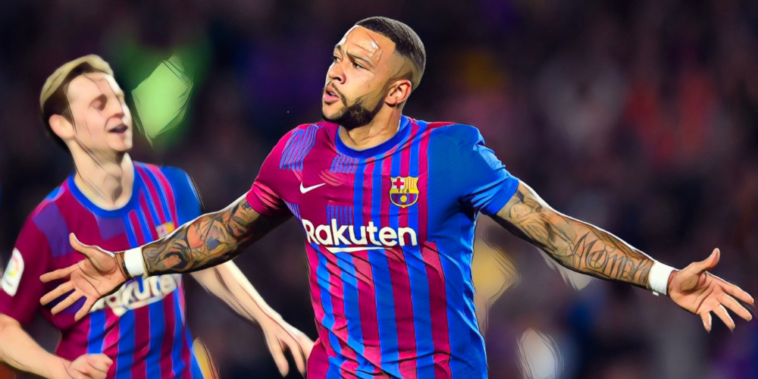 Manchester United are reportedly considering a move to re-sign Memphis Depay, as well as his Barcelona teammate, Pierre-Emerick Aubameyang

The Red Devils are known to be in the market for attacking additions before Thursday’s transfer deadline, with the club looking light up front.

United have been strongly linked with Ajax winger Antony over the summer, and have seen a €90 million (£74m) bid rejected by the Dutch champions, though it is thought that the club could add two forwards to their ranks.

United’s current talisman, Cristiano Ronaldo, is currently trying to find a Champions League club willing to take him on, which would leave Anthony Martial as the club’s only recognised centre-forward, with Marcus Rashford often looking more effective from the left rather than through the middle.

The Old Trafford outfit have been linked with PSV’s Cody Gakpo, though according to Fabrizio Romano, Barcelona pair of Memphis Depay and Pierre-Emerick Aubameyang are both on the club’s radar.

The duo have fallen down the pecking order at the Nou Camp following the arrival of Robert Lewandowski and could be allowed to leave as the Catalan club continue to look to balance the books, with new signing Jules Kounde still unable to be registered.

Memphis was close to joining Juventus earlier in the window, though the deal has since broken down, and Romano says a return to Old Trafford could emerge as an option in the final days of the window.

The Dutchman joined Louis van Gaal’s United back in 2015, but struggled to adapt to life in the Premier League – scoring seven goals in 53 appearances – before being shipped out to Lyon after just 18 months. He has, however, rediscovered his best form for both club and country, netting 42 goals in 80 appearances for the Netherlands, second only to Robin van Persie in the all-time scoring charts.

Depay could be allowed to leave Barcelona on a free transfer in a bid to get his wages off the books, with the 28-year-old having secured an agreement to terminate his contract.

Romano reports that United are also interested in former Arsenal forward Aubameyang, though says that the Gabon international prefers a move to Chelsea and a reunion with Thomas Tuchel.