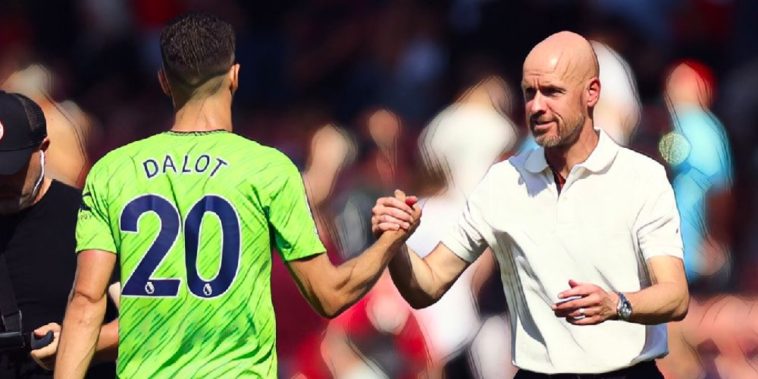 Today’s encounter started in a low-key manner but did eventually explode into life on 18 minutes after a chaotic passage of play in the Saints’ six-yard box. Firstly young Irish goalkeeper Gavin Bazunu produced a full-length stop to deny Anthony Elanga from close range before Kyle Walker-Peters cleared off the line, and finally, the impressive Armel Bella-Kotchap pulled off a sensational block to deny Christian Eriksen when it looked odds-on that the Dane would score.

On the half-hour mark Southampton finally threatened the Red Devils’ goal, with Bella-Ketchap firing over from four yards out after a James Ward-Prowse corner and the lively Che Adams then stung David de Gea’s palms from the edge of the area.

At the beginning of the second period, Manchester United started the much brighter of the two sides and on 54 minutes they would take the lead through their skipper, Bruno Fernandes. A slick passing move by Erik ten Hag’s side ended in Diogo Dalot firing a pullback across the Saints’ area for Fernandes to finish brilliantly, first time and on the volley.

United failed to kick on and take control of the game though, and it was Southampton who began to dominate and the home side pinned their opponents back as they sustained attack after attack. Despite their endeavour and the impressive set-piece delivery of Ward-Prowse the Saints struggled to break down a resolute United defence and a Joe Aribo header that was expertly saved by de Gea was as close as the South Coast outfit would come to equalising.

Speaking afterwards United boss Erik Ten Hag was pleased with how much his side improved from the Brentford debacle but admitted they could have controlled the game better after taking the lead.

“It has to be the standard for Manchester United. It has to be normal but also you celebrate every win because you have to fight for it. We learnt from our lesson in Brentford,” Ten Hag told the BBC.

“There is room for improvement but there was also some really good football. The last half an hour was a survival and there I think we can do better.

“There was not always pressure on the ball but [the defenders] stayed compact and were straight in the duals. I was comfortable they would deal with it. The finish [from Bruno Fernandes] was magnificent but the part before, it was a team goal. We built it up from the back and there were some more moments straight after half time where it was well played from the team. We have to improve in possession.

“The win against Liverpool gave us a lot of belief because we knew we could compete against one of the best teams in the world. Still at the start of the season it is really tough and hard work so everyone in the squad needs to be conscious of that.

Attention will now turn to United’s activity in the transfer market with fans still expecting incoming before the window shuts on September 1st, although Ten Hag remained coy when quizzed about potential signings.

“The transfer window… you don’t know what to expect. We will see. As Manchester United you always have to try do better so we can see if we can strengthen the squad, if not we will do with what we have got.”