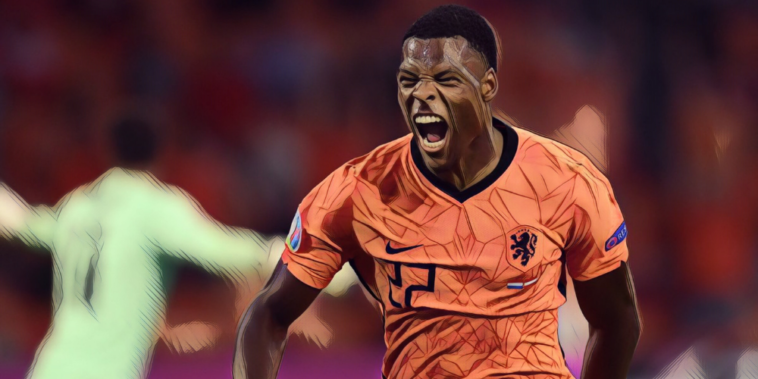 Manchester United are being linked with a move for Denzel Dumfries as the club look to strengthen at right-back.

Manchester United are preparing for their busiest summer in years, with five players having already left on free transfers, while several more fringe players are set to be allowed to leave

United have been strongly linked with Frenkie de Jong, Darwin Nunez and Christian Eriksen as they look to strengthen in midfield and in attack, though they are also expected to look to bolster in the middle of defence and at right-back.

According to Italian outlet Calciomercato, the Red Devils are ‘on the trail’ of Inter Milan full-back Denzel Dumfries, though will reportedly face competition from German champions Bayern Munich, despite their pursuit of Ajax’s Noussair Mazraoui.

Dumfries only moved to the San Siro last season, but established himself as the club’s first-choice right-back following the departure of Achraf Hakimi to PSG, making 45 appearances for the Nerazzurri, scoring five goals and providing five assists.

The report says that while Inter have not received any offers for the 26-year-old, they would, however, be willing to take any that come their way into consideration.

There’s no suggestion as to how much Inter Milan would want for the Netherlands international, though with three years still remaining on his contract, they are almost certainly going to want well in excess of the €12.5m they paid for him last year.

United currently have Aaron Wan-Bissaka and Diogo Dalot as options at right-back, though they are thought to be willing to listen to offers for Wan-Bissaka who hasn’t shown any real kind of improvement since his £50 million move to Old Trafford three years ago.

Neither Dalot nor Wan-Bissaka had a single goal involvement this season, with Erik ten Hag seemingly looking to add increased creativity from wide areas.