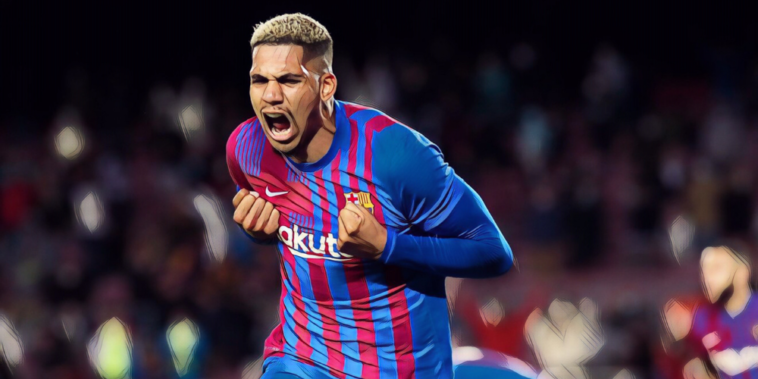 Manchester United and Arsenal have tabled offers for Barcelona defender Ronaldo Araujo, whilst Liverpool have made a proposal to prise Gavi from the Spanish side.

Barcelona are in contract negotiations with Aruajo and Gavi with both players out of contract in 2023, with the Spanish side seeking to ward off interest from the Premier League in the highly-rated duo.

Reports in Spain have emerged that the duo have now received proposals from England, with both Manchester United and Arsenal interested in signing Aruajo.

The Uruguay international has emerged as a central figure in the Barcelona side over the past two seasons and both sides are understood to be pursuing a deal for the centre-back.

The usually reliable Barcelona based journalist Gerard Romero has revealed that the Red Devils have offered Aruajo a deal worth around €8m, whilst Arsenal – who could be in a position to offer Champions League football next season – are offering €6m per season for the defender.

Romero is also reporting that Liverpool remain in the chase to sign Gavi. The 17-year-old has enjoyed a meteoric rise this season, making 33 appearances in all competitions for Barcelona and becoming the youngest player to ever represent Spain at senior level.

Gavi’s current deal contains a release clause of around €50m (£42m) and Barcelona are desperate to tie up a new deal for the teenager amid interest from Merseyside, with the Reds reportedly willing to offer the midfielder a deal worth €6m-per-season as Jurgen Klopp looks to refresh his engine room.

Gavi has also been linked with Manchester United and Chelsea in recent months, though the latter are currently unable to make any signings given the government sanctions placed upon the club.