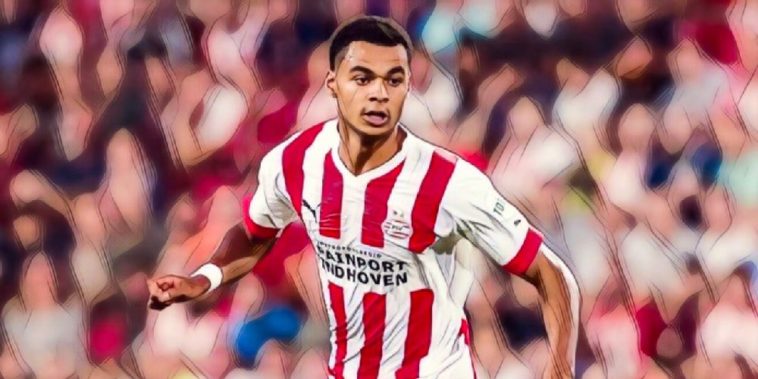 Manchester United are the latest club to be linked with a move for Cody Gakpo, though they are only one of at least five Premier League sides to be interested in the PSV star.

The Netherlands international netted 21 goals in 47 appearances for PSV last season, as the Eindhoven outfit finished second in the Eredivisie behind Erik ten Hag’s Ajax.

Gakpo netted twice in PSV’s opening day victory against FC Emmen, while was involved in their 4-3 aggregate win over Monaco to set up a Champions League qualifying fixture against Rangers later this month.

Manchester United’s interest comes as Erik ten Hag looks to bolster his attacking options at the club, and speaking about the Red Devils’ interest in the 23-year-old, Dutch football expert Marcel van de Kraan said that a move to Old Trafford would likely appeal to the winger, though there are five Premier League clubs interested in him, including Arsenal.

“He is the kind of player Erik Ten hag likes because he likes to play with wingers,” he told Sky Sports. “For every Dutch player who goes to play in England, it takes time to adapt. With that in mind, I’m a bit concerned because Gakpo is outstanding in all the big Dutch big matches and in Europe. But playing in and out, I’m a bit concerned.

“I think eventually he will eventually be the top man at a big club and I could see him featuring for Manchester United but there are other top clubs in the bidding for wanting him. Arsenal made a bid for him weeks ago and there are around five Premier League clubs after Gakpo. But if the choice is there, he will go to Manchester United.

He is valued at £35m 💰 pic.twitter.com/KuOCEnxqZ4

“PSV have made it very clear there is no way he will sell this boy until they are certain they play in the Champions League.”

Reports linking Gakpo to United have only emerged in recent days, with the club yet to submit any kind of offer to PSV. However, Van de Kraan thinks that United’s pursuit of Frenkie de Jong, could ‘stand in the way’ of a deal.

“It’s not close but he’s on their target list and I think he’s a prime target. There’s a still major transfer issue over Frenkie de Jong and it could stand in the way of Gakpo going to Man United.

“Frenkie de Jong is still a No 1 priority for the club and it just depends on what is happening in the political department of Barcelona and the wages they owe him.”

PSV’s Champions League qualification games against Rangers come on the 16th and 24th of this month, and Van de Kraan thinks any potential move could drag onto the final day of the transfer window.

“I could see this transfer going to deadline day, especially with PSV Eindhoven’s situation. Let’s see where Frenkie de Jong’s situation could be on deadline day because that could go to the line as well. De Jong is an expensive operation for United and it depends how much money is left for other players.

“In Holland, prices are not that big but Manchester United are back on the market with a Dutch coach. When you see Lisandro Martinez going for £50m to £60m, you go ‘wow, that’s amazing for a player who arrived for £7m’ so what will PSV charge for a striker or a winger like Cody Gakpo?”

As for De Jong, there is increasing speculation that the much-coveted midfielder would prefer a move to Chelsea if he were to choose to leave Barcelona.