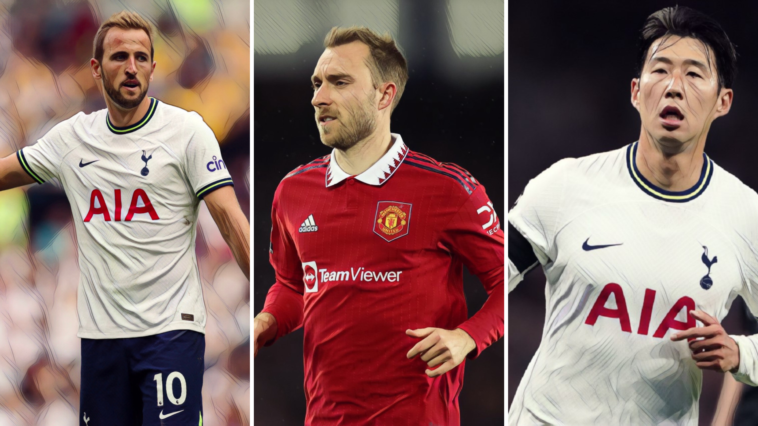 Manchester United take on Tottenham in the Premier League this evening as both teams look to make a statement in the race for the top four.

United have recovered from a disastrous start to climb to fifth and will hope for a positive result as the Red Devils look to close the gap on the sides above. However, Spurs arrive at Old Trafford in confident mood, having made their best start to a league campaign sign 1964.

Ahead of their clash, we’ve compiled our Manchester United vs Spurs combined XI.

The two teams boast two of the most experienced goalkeepers in the Premier League with both shot-stoppers having spent more than a decade as first-choice number ones.

Lloris has the edge over David de Gea in terms of current form, with the 35-year-old having had a prominent role in Spurs’ strong defensive record this season.

Yet another big performance from Hugo Lloris 👏 pic.twitter.com/FH10CdArCo

Just one team – Newcastle – have conceded less goals than the north Londoners, with Lloris behind only Manchester City’s Ederson in the race for the Premier League’s Golden Glove.

Diogo Dalot has nailed down a regular role under Erik ten Hag and appears to be improving with increased involvement at Old Trafford.

The Portugal international is the only outfield player to have started all 13 games for the club this season and has been the Red Devils’ most improved performer since Ten Hag’s arrival.

The 23-year-old is a marauding threat when venturing forward and has progressed defensively. He earns a place in our combined side ahead of Spurs’ unconvincing selection of options, with neither Emerson Royal, Matt Doherty or Djed Spence having made a lasting impression on Antonio Conte.

Romero has been a cornerstone of the Spurs side since his arrival from Atalanta, with his aggressive and front-footed approach making the centre-back a firm favourite in north London.

There’s both South American snarl and sophistication with Romero, a defender who can breach defensive lines with either precise passes forward or powerful runs from deep.

Cuti Romero is quality, pass it on.

Combative and classy, the 23-year-old – who is unbeaten at international level with ten clean sheets from his 12 caps – will hope to provide the foundation for Argentina’s challenge at next month’s World Cup.

Raphael Varane’s importance to the Manchester United side is often measured in his absence, with the Red Devils a far better team with the centre-back at the heart of it.

The France international has seen fitness issues hinder his time in the Premier League, but when fit and in form is a major influence on the United side. This season the 29-year-old has lost just once when featuring from the start and has formed an impressive partnership with Lisandro Martinez – an unfortunate exclusion form this side.

This club, this team, your support !! 😍 pic.twitter.com/i4k9WxRLbn

With four Champions League winners’ medals and the World Cup tucked safely away in the cabinet, there are few centre-backs with the pedigree of Varane.

Ivan Perisic has proven a shrewd signing for Spurs this season, having picked up the experienced Croatian on a free transfer from Inter Milan during the summer.

Though more naturally inclined to attack, he has revelled in a wing-back role under Antonio Conte where his relentless work-ethic and quality in possession has been evident. The 33-year-old has provided three assists in just six Premier League starts, despite still working his way towards full fitness and match sharpness.

With Luke Shaw finding his way back into form and Tyrell Malacia adapting to the division, the creative Croat earns a starting spot.

An instrumental part of Spurs’ success so far this season, Hojbjerg is enjoying arguably the best period of his career under Antonio Conte.

The Denmark international has been in excellent form and has registered three goals and three assists in all competitions. The 27-year-old’s improved instincts further forward have complimented the combative edge of his defensive game, with Hojbjerg and Rodrigo Bentancur among the most in-form midfield duos in the division. It is an axis in midfield that has brought a balance of technique and tenacity.

Eriksen has been a brilliant signing since arriving from Brentford on a free transfer last summer, with the 30-year-old having exerted a creative class on the Manchester United midfield.

🗣️ “No, of course I've known him a long time. Everyone knows he developed at Ajax, I knew him from the Netherlands but as a manager, I have faced him. I knew his qualities and I'm so happy we signed him.”

The midfielder has thrived in a deeper role, where his technical excellence has provided a bridge between the Red Devils’ backline and final third. Spurs will know better than most the need to shut-down their former star, with Eriksen having been a firm favourite during six-and-a-half seasons in north London.

Rodrigo Bentancur has been a perfect pick-up for Antonio Conte and Spurs, with his winter window arrival having proven a bargain.

The 25-year-old had fallen down the pecking order at Juventus, but he has been a mainstay of an improving Tottenham team since arriving into English football. The Uruguayan’s promising partnership with Pierre-Emile Hojbjerg has restricted summer signing Yves Bissouma to a bit-part role, with Spurs’ best performances often coming when Bentancur is on-song.

WHAT A DELIVERY FROM BENTANCUR 💫

Højbjerg with the finish! 🤩 pic.twitter.com/buV5v9xCzk

Eric Dier was full of praise for the midfielder last month, stating his belief that Bentacur’s best improves the side as a whole.

“Rodri is amazing, what a fantastic player,” Dier told SPURSPLAY. “I think we play well when he plays well, that’s the biggest compliment I can give him.”

Marcus Rashford has shown signs of rediscovering his best form this season, following an underwhelming 18 months for the England international.

The 24-year-old has scored six goals and provided three assists in nine starts in all competitions, appearing sharper, fitter and more confident than during a 2021/22 season of struggle.

"We are not fair with Rashford. You cannot compare him with Messi and Cristiano." 🤔

Ander Herrera says Marcus Rashford can be a great player in his own right 🗣 pic.twitter.com/L3j1oMVnlz

After consecutive campaigns of 20+ goals in 2019/20 and 2020/21, Ten Hag will hope to coax similar levels from Rashford as he looks to return to his best for club and country.

Son Heung-min is one of the Premier League’s best attacking talents and appears to be finding his rhythm once again after a sluggish start to the campaign.

The South Korean won the division’s Golden Boot last season with 23 league goals, but a return of three goals – all of which came with a hat-trick against Leicester – has been below his usual standard this time around.

However, Son was electric in the Champions League win over Eintracht Frankfurt last week and will be at the forefront of Erik ten Hag’s plans as he looks to shackle Spurs this week. The 30-year-old is a footballer capable of match-winning brilliance.

One of world football’s premier centre-forwards, Harry Kane has had his best-ever start to a Premier League season in 2022/23.

Kane has scored nine goals from just ten appearances for Spurs and has risen to third among the division’s all-time record goalscorers.

🤩 @HKane has scored in each of his last five #PL matches, his longest scoring streak in the competition#MUNTOT pic.twitter.com/64hzfytrj9

The 29-year-old needs just eight goals to join Alan Shearer and Wayne Rooney on 200+ goals in the Premier League, while he is closing in on becoming the leading scorer for both Spurs and England, with both records in reach before the end of 2022.