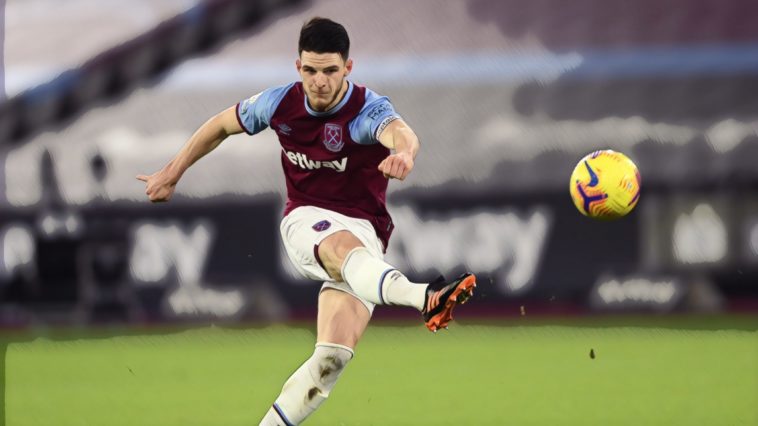 Manchester United are set to make signing Declan Rice their ‘top priority’ next summer, as their search for a new holding midfielder continues.

The England international has blossomed into of the most effective defensive midfielders in the Premier League in recent years, producing a string of fine displays last term to help West Ham secure an unlikely sixth-placed finish and the resulting Europa League qualification.

Such form has already been translated to this season for the Hammers skipper, with the 22-year-old notably netting on his European bow in midweek away at Dinamo Zagreb following a super solo run and finish to extend the visitors lead.

That fine start to the new campaign comes after what was a strong Euro 2020 showing from the former Chelsea academy product, as he featured in all seven of the Three Lions tournament meetings en route to the final, including in the showpiece defeat to Italy.

Those displays at the base of Gareth Southgate’s midfield had lead to suggestions that he could well be in line to secure a move away from the London Stadium over the summer, albeit with no such departure taking place prior to the now-closed window.

One side who were heavily linked with a move for the youngster throughout the window was Manchester United, and while they missed out this time around, the Independent are reporting that Rice is their ‘top priority’ next summer.

The report suggests that the player’s camp were attempting to figure out if a possible exit could happen over the summer, although West Ham’s reported £100m asking price is said to have proved prohibitive, after Ole Gunnar Solskjaer’s side had already splashed out £73m on Jadon Sancho.

The player himself is said to be interested in the move, while the report goes on to also add that members of the United squad have teased Rice regarding a potential switch to Old Trafford while on England duty together, such is their desire to have him join their club setup.

Solskjaer is believed to be a keen admirer of the midfielder and views him as the perfect foil for Paul Pogba, with the Frenchman in need of a more defensive-minded player alongside him to allow him to take up a more attacking role.

The Red Devils currently have Nemanja Matic, Scott McTominay and Fred as potential options at the base of the midfield, although none of those have ever truly convinced.

United will be able to keep a close eye on their potential target this weekend, as they go up against West Ham on Sunday afternoon, before the two sides meet again in the Carabao Cup on Wednesday evening.