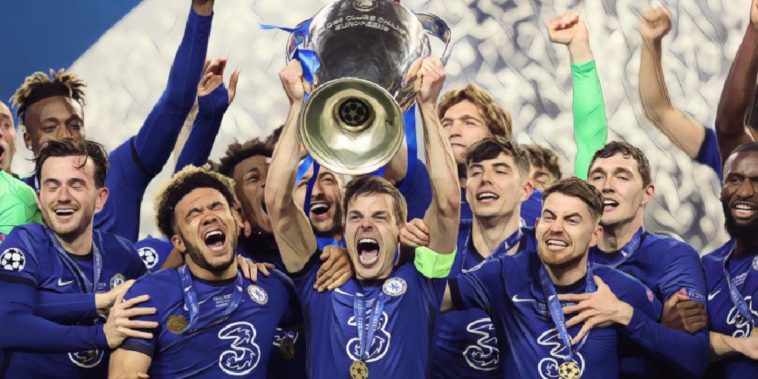 In an enthralling opening period, it was the Blues who perhaps started strongest, Timo Werner twice squandering chances to take the lead, before Havertz eventually made the breakthrough on three minutes before half-time, taking the ball around the advancing Ederson following a stunning through ball from Mason Mount.

While City grew into the game after the break, the loss of captain Kevin De Bruyne to injury was a major blow to their hopes of a maiden Champions League title, with Pep Guardiola’s side struggling to create anything of any real note against a stubborn Blues backline.

Following a nerve-jangling seven minutes of stoppage time in which Riyad Mahrez almost fired home, Thomas Tuchel’s side eventually hung on for a deserved win, ensuring a first triumph in the competition since 2012.

Let’s see how the players rated.

Perhaps a tad unfortunate to not prevent Kai Havertz’s winning goal, yet was his usual composed self other than that. Almost registered yet another assist after a magnificent lofted pass to Raheem Sterling early on, although the Englishman couldn’t sort his feet out.

Struggled at times to deal with the Mount-Chilwell link-up down the Chelsea left, but showcased his blistering pace in attack on more than one occasion. May be fearing for his England starting spot after Reece James’ impressive performance for the Blues.

Has been a revelation this season, but was perhaps not helped by the lack of defensive cover ahead of him on the night. Almost provided his side a route back into the game with an excellent pull-back late on, after popping up in an unconventional left-wing position.

Endured a shaky opening as he failed to deal with the pace of Timo Werner in behind, yet grew into the game as it went on.

Has been an unsung hero at times in recent years and looked composed throughout, although crucially failed to follow the run of Havertz for the game’s only goal.

Came off worse in a nasty collision with Antonio Rudiger midway through the second-half, bringing an end to his evening. Hadn’t quite been at his best before his withdrawal, but was a huge blow for City to lose their influential captain nonetheless.

Kevin De Bruyne couldn't hold it back after coming off injured 😢 pic.twitter.com/ENM5qra2xb

Pep Guardiola made the surprising decision pre-match not to select Rodri or Fernandinho in a defensive midfield role, leaving the German to slot in at the base of the midfield. Did pick up an early booking, but didn’t do too much wrong otherwise.

Has been much improved this term after a difficult few seasons, yet couldn’t make any real impact in an attacking midfield role, with the Blues shutting off any real space for him to work in.

A quiet night for City’s semi-final hero, the Algerian really struggled to get into the game, yet so nearly levelled the game in stoppage time, his late effort agonisingly missing the target.

After an initial quiet opening, the 21-year-old looked much brighter as the game wore on and attempted to drive his side forward, but to no avail. It may not have been his best game in a City shirt, but it’s been a fine breakthrough campaign nonetheless.

A somewhat surprise inclusion after having been restricted to the substitutes bench in recent months, the England international engaged in a hard-fought duel with Reece James, although the younger man undoubtedly got the better of the battle. Faded after a lively start and was replaced by Sergio Aguero late on.

Gave City a focal point and injected a much-needed spark into their play, but couldn’t fashion an opening for himself.

A second-half substitute, Guardiola’s men perhaps could have done with the veteran Brazilian from the start to cover the backline.

Not the fairytale ending the legendary Argentine was hoping for.

In truth, the Senegal international was unexpectedly quiet on the night, protected superbly by the men in front of him. Perhaps a tad relieved to see Riyad Mahrez’s late effort fly just over the crossbar.

A typically solid display from the Blues captain, who marshalled his backline superbly, despite seeing fellow veteran Thiago Silva withdrawn early on. The Spaniard never seems to dip below a 7/10, as Chelsea’s ‘Mr. Consistent’.

The Blues only player with previous Champions League final experience saw his game cruelly cut short by a groin injury midway through the first-half, the Brazilian veteran having to be replaced by Andreas Christensen.

Continues to make Frank Lampard’s decision to leave him out earlier this season look perplexing, after putting in another rock-solid showing. Not only did he help blunt a usually rampant City attack, but produced a sensational sliding challenge to deny Phil Foden in the first-half.

On a big night for the 21-year-old, he looked the epitome of calm and seemed to relish the tussle with compatriot Raheem Sterling, his recovery speed preventing the City man making in-roads time and time again. A performance that will only enhance his England standing.

There were question marks about his future at Stamford Bridge a year or so ago, but this season has shown why he is simply the world’s best in his position, with his final display just extraordinary. It’s no doubt a real cliché, but the diminutive Frenchman was everywhere on the pitch, breaking up play time after time to ease the pressure on his side.

The Italy international may not have especially caught the eye on the night, but was the perfect foil for teammate Kante, keeping possession in his usual tidy manner and putting his foot in when it mattered.

Like his fellow wing-back, James, the Englishman looked at ease on the big occasion, coping more than admirably with the threat of Kyle Walker and Riyad Mahrez down City’s right side. Linked nicely with Mason Mount down the left, including in the build-up to his side’s goal.

Produced another superb display to rubber-stamp his status as one of Europe’s brightest talents, providing his side with a creative spark while also working tirelessly off the ball. Delivered the game’s key moment of magic with a stunning through-ball for Kai Havertz’s opener.

At the end of what’s been a difficult debut campaign for the German, the club’s record signing somewhat repaid his transfer fee with his first-ever Champions League goal after latching on to Mount’s delightful threaded pass. Almost capped his night with an assist late on, yet Christian Pulisic couldn’t convert.

Reporter: “Have you repaid your transfer fee?”

Havertz: “I don’t give a fuck, we just won the Champions League” pic.twitter.com/V7AREP3pvE

A typically frustrating Timo Werner display. Looked a real threat in the early stages with his searing pace, yet as he has done so often this season, failed to convert two guilt-edged chances to give his side the lead. Withdrawn on 65 minutes.

Thrown into the fray with the game firmly in the balance, the Dane produced an excellent display to help steer his side to victory. Put in a vital block late on to deny a Riyad Mahrez pull back.

With Chelsea somewhat hanging on in the closing stages, the winger offered a real threat on the break, although perhaps should’ve calmed his side’s nerves with an excellent chance late on to kill the game.