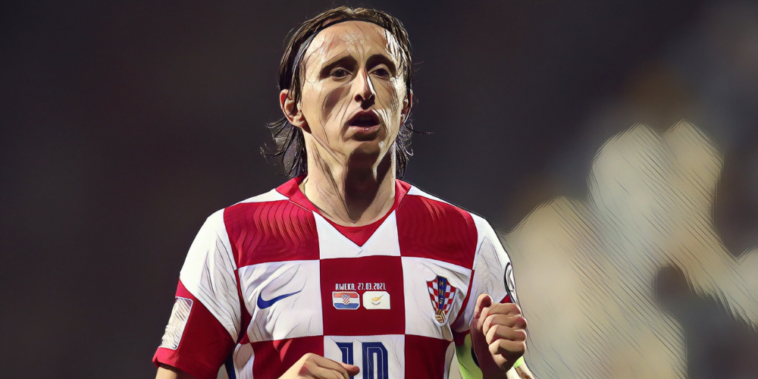 Euro 2021 is likely to be Luka Modrić’s swansong tournament in a Croatian jersey. It may be the last time we see the midfield maestro take to the international stage, but there’s still plenty of fight left in the old dog.

At the ripe old age of 35 the Real Madrid playmaker is still one of the best midfielders around. However, with the 2022 World Cup in Qatar taking place in the winter, the Croatian captain will be 37 by the time the competition comes around. Although he hasn’t spoken about his retirement plans yet, this summer should mark his last appearance at a European Championship.

Modrić, alongside Ivan Rakitić, Mario Mandžukić and Ivan Perišić, championed Croatia’s second ‘golden generation’. Largely unfancied at Euro 2020, Modrić et al will need to be on top form to ensure he ends his international career on a high.

Let’s take a look back at the veteran’s impressive record at international tournaments, as well as his ongoing importance for both club and country.

Like so many of the greats Modrić has produced some of his best form at major international tournaments. Having appeared twice as a substitute at the 2006 World Cup (including a cameo role against cousin Mark Viduka’s Australia) the man from Dalmatia announced himself to the world at Euro 2008.

Four days after scoring his side’s opening goal of the competition against Austria, he was voted man of the match in a thrilling 2-1 victory over pre-tournament favourites Germany. Despite a dramatic quarter-final loss to Turkey on penalties, Modrić was voted in the team of the tournament – becoming only the second Croatian to receive the honour (the first being Croatia’s all-time top goalscorer Davor Šuker).

After the tournament Modrić, who was Croatia’s outstanding performer at Euro 2012, ended the summer on personal high – sealing a dream move to Real Madrid. By the time the 2014 World Cup in Brazil had rolled around Modrić was already a bonafide superstar. The diminutive operator was expected to carry his side to the later stages of the competition, but losses to Brazil and Mexico led to an early exit, as well as an all-too-familiar sense of underachievement.

Modrić began Euro 2016 in fine form, with the Real Madrid playmaker netting a memorable winner against Turkey in the group stage – a long-range volley that enraptured the Parc des Princes. In doing so, he became the first Croatian to score at two separate European Championships.

Despite the early promise Croatia, under the stewardship of manager Ante Čačić, were dumped out of the tournament at the round of 16. A few games into World Cup 2018 qualification, amid mounting fan pressure, the Croatian Football Federation (HNS) sacked Čačić and turned to Zlatko Dalić – the man who would steer Croatia’s second golden generation to the brink of success.

At the 2018 World Cup Modrić, who had become team captain following Darijo Srna’s retirement, was at the peak of his powers. After scoring in his country’s 2-0 win over Nigeria, he added the second in a 3-0 rout against group rivals Argentina – a screamer from well outside the box. In the round of 16, having missed a penalty against Denmark in regulation time, Modrić showed the strength of his character, courageously stepping up to slot home a spot-kick in his side’s 3-2 penalty shoot out victory.

Croatia’s captain fantastic had a profound impact on the quarter and semi-finals, providing the assist for Domagoj Vida’s crucial equalizer against Russia and playing an instrumental role in the 2-1 semi-final victory over England.

Despite his best efforts, Modrić was powerless to stop France in the final, with a battling Croatia going down 4-2. In the aftermath of the final Modrić and his partner in crime Rakitić were lauded as the best midfield duo in the competition, perhaps the best combination since the heyday of Xavi and Iniesta at Barcelona.

When the dust had settled on the final Modrić received the Golden Ball for the best player at the tournament, was once again included in the team of the tournament, and was subsequently awarded the Ballon d’Or – breaking Lionel Messi and Cristiano Ronaldo’s ten-year long stranglehold over the award. Modrić’s manager Dalić beamed at the achievement saying, “I can’t think of a better player to succeed Ronaldo and Messi. He [Modrić] leads by example and makes everyone around him a much better player”.

It was reported that Modrić had run 72.3km in the seven games he played in Russia – that’s more than 10km per match, with the games coming thick and fast. Astoundingly Modrić, the model professional, has missed just one tournament match through injury (Spain 2016) since Euro 2008. He has played every other minute of tournament football, save for 62 minutes on the two occasions he was substituted. Indeed it seems whenever Modrić scores at a tournament Croatia go on to win, having won on each of the four occasions he has netted. The records don’t stop there.

In March, having defeated Cyprus in a World Cup qualifier, Modrić became Croatia’s most-capped player, surpassing former captain Srna’s record of 134 caps. A fitting accolade for a player who has been labelled the greatest Croatian footballer of all-time by his compatriots, including Robert Prosinečki and Šuker – members of Croatia’s original golden generation.

His peers agree, with former midfield partner Rakitić saying, “Modrić is from a different planet and came to play with us mortals. Not only is Luka the best Croatian player ever, but he is a great person – a leader.”

You're going to love this video: freshly crowned as Croatian most capped player, @lukamodric10 shows his deepest emotions, with his teammates giving him standing ovation after watching the highlight reel of Luka's amazing international career. Pure passion. #Family pic.twitter.com/YVLt1mxNsb

Though a little long in the tooth Modrić was arguably Real Madrid’s player of the year last season – a torrid campaign by any metric. Los Blancos were knocked out of the Copa del Rey by third division minnows Alcoyano, humiliated by Athletic Bilbao in the Supercopa de España, dumped out of the Champions League by a rampant Chelsea and, most egregiously, pipped to the La Liga title by city rivals Atlético.

Yet Modrić, who made more La Liga appearances this campaign (35) than in any of his nine seasons at the Bernabéu, has remained consistent throughout. As Alex Ferguson once said, “One thing people often underestimate with Modrić is his stamina.”

Modrić belied his age last season, playing 2744 minutes (4th most at Real) of La Liga football. His reading of the game, passing and ball retention – the cornerstones of his game – were all exemplary. He completed 48 interceptions (2nd), 50 key passes (2nd), attempted more passes (2210) than any other player at the club and boasted an impressive passing accuracy of 88.1%.

Modrić, who began his career with Dinamo Zagreb as an attacking midfielder, was his usual nimble self in possession, attempting more dribbles (55) than any of his teammates. The man dubbed “Vinegar” by his fellow Madridistas (for his temper in training) ranked 4th in tackles attempted (37) and 2nd in recoveries (48).

The Croatian’s insatiable hunger for success endures, and was particularly evident during Real’s 2-1 triumph over bitter rivals Barcelona in April. In the aftermath of the crucial victory, with the rain bucketing down, Modrić confronted Barca’s Gerard Piqué. The Blaugrana man, who was seeking to berate the ref over perceived injustices, lit a fire under his rival and some pleasantries were exchanged. In a season when Barca achieved their lowest points tally in 13 years (79) Piqué’s irascibility was somewhat understandable, if not misguided. Nevertheless, Modrić remains a passionate competitor – one not to be trifled with.

Modric: "You're waiting for the ref to complain huh?"

Modric: "How many more do you want?"pic.twitter.com/EoIiBCXayC

It is rather panglossian to expect Modrić to perform to the same lofty standards he set in Russia three years ago, but his stellar form this past season gives his nation every hope of another roller-coaster ride this time around.

Anyone who watched the smooth operator in action against Belgium on Sunday night was witness to another midfield masterclass. I lost track of the number of Belgians Modrić embarrassed with cheeky nutmegs.

“I’m 35 but I feel like I’m only 27. You shouldn’t look at age, it’s all about how we perform on the pitch. I’m still hungry for more, to continue playing at the highest level, and I feel great.”

Croatia’s leading light may remain undimmed, but the task facing his team this summer is a considerable one.

In May Modrić signed a one-year contract extension with Real Madrid, opting to stay on at a reduced rate of pay despite reported offers from MLS and the Middle East – a sign of his enduring appetite to play at the top. By the time his new contract expires Modrić will have served Los Merengues for over a decade.

He may extend his stay in Spain further, and we may yet see Modrić at the 2022 World Cup – who knows? We live in hope that this isn’t the end to his glittering international career.