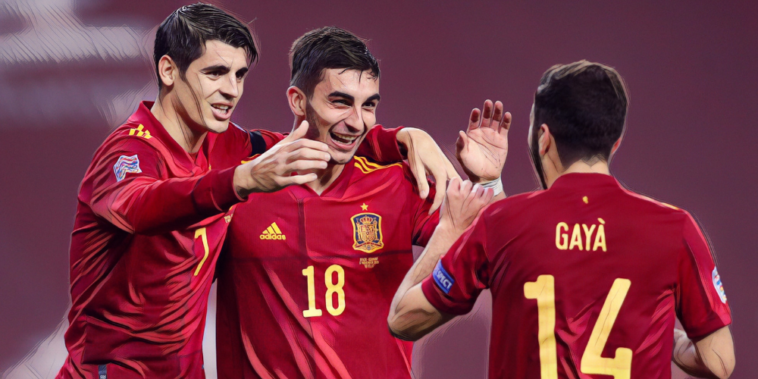 Spain start as favourites to qualify from Euro 2020’s Group E, where La Roja will face Sweden, Poland and Slovakia in their bid to recapture former glories.

Spain head into Euro 2020 looking to reclaim the trophy they won twice in succession in 2008 and 2012, a new side having emerged following the retirement of stalwarts such as Andres Iniesta, David Silva and Gerard Pique after a disappointing World Cup performance three years ago.

There has been even more change ahead of this summer’s finals with Sergio Ramos omitted from the squad due to injury problems, whilst replacement captain Sergio Busquets’ positive test for Covid-19 has thrown La Roja’s preparations into chaos.

Aymeric Laporte has the unenviable task of replacing Ramos after earning his first cap earlier this month, the Manchester City centre-back expected to partner highly-rated Villarreal defender Pau Torres after swapping his international allegiance from France to Spain.

Busquets’ potential absence could see a greater responsibility thrust on Rodri at the base of the midfield, who will be supported by Liverpool star Thiago Alcantara, Fabian Ruiz, Koke and exciting Barcelona teenager Pedri amongst Enrique’s midfield options.

Jordi Alba is expected to captain the side in Busquets’ absence after returning to the international fold earlier this year, the Barcelona full-back previously overlooked throughout 2020.

Question marks remain over who will lead the line for the Spanish, with Alvaro Morata the most senior option amongst Enrique’s arsenal of attackers. The Spain boss will find it difficult to overlook Gerard Moreno however, the Villarreal frontman having scored 30 goals in all competitions for the Europa League winners in 2020/21.

Sweden suffered a disappointing group stage exit at Euro 2016 before reaching the World Cup quarter-finals two years later and head into a third consecutive major tournament with hopes of reaching the knockout rounds.

Janne Andersson’s team finished as runners-up to Group E opponents Spain in qualification, losing just once in 10 fixtures to comfortably finish clear of Norway and Romania.

Much of the talk pre-tournament centred around the return of Zlatan Ibrahimovic to international duty five years after his retirement, following the veteran’s brilliant season at AC Milan.

Sweden’s record scorer will miss Euro 2020 through injury, however, though the absence of Ibrahimovic could allow a younger generation to emerge from his shadow with Aleksander Isak providing the cutting edge in attack.

The 21-year-old scored 17 league goals for Real Sociedad last season and alongside Juventus’ youngster Dejan Kulusevski could provide the moments of inspiration Sweden will need to progress.

Manchester United centre-back Victor Lindelof will lead the backline, whilst RB Leipzig’s Emile Forsberg will be tasked with providing the ammunition to the forwards.

Sweden have bounced back from a difficult 2020 and will enter the tournament following five consecutive wins – albeit against limited opposition – though few will be expecting an ageing team to reach the latter stages.

Poland will be bidding to better their performance in reaching the quarter-finals five years ago, with Paulo Sousa’s side safe in the knowledge they possess the world’s leading centre-forward amongst their ranks.

Lewandowski is his country’s leading appearance maker and record goalscorer and quite possibly the finest footballer on the planet right now, having netted an incredible Bundesliga record of 41 goals in just 29 league appearances for Bayern Munich in 2020/21.

That record-breaking feat followed a 55-goal campaign that fired the German side to a historic Champions League, Bundesliga and DFB-Pokal treble the previous season, with the 32-year-old the favourite to win the Ballon d’Or later this year.

All eyes will be on Lewandowski with Poland’s hopes firmly pinned on his shoulders, as Sousa looks to implement an industrious midfield to get forward in support of his side’s talismanic number nine.

Piotr Zielinski will be the man Poland look towards to create chances for Lewandowski following an impressive season at Napoli that produced eight goals and 10 assists, whilst Arkadiusz Milik offers a potential centre-forward partner.

Slovakia are into their second European Championship as an independent nation after reaching the 2016 finals, where they progressed to the last-16 in third-place from a group containing both England and Wales.

Stefan Tarkovic was part of the backroom staff for that tournament before taking the role as head coach on an interim basis in October 2020, successfully guiding Slovakia through a play-off against Northern Ireland to earn the job on a permanent basis.

Slovakia are likely to line up in a 4-1-4-1 formation with Inter Milan centre-back Milan Skriniar at the heart of the defence, the 26-year-old a regular of the rumour mill with Premier League sides having been long linked with the Serie A title winner.

Marek Hamsik will captain the side with the 33-year-old the nation’s record cap holder and goalscorer, with a midfield trio of Hamsik, fellow veteran Juraj Kucka and Napoli star Stanislav Lobotka key to their hopes.

Slovakia’s preparations have been mixed with draws against both Cyprus and Malta during March’s World Cup qualifiers and goals could prove problematic, hopes pinned on either the 33-year-old Michal Duris or inexperienced Feyenoord youngster Robert Bozenik as a lone centre-forward.