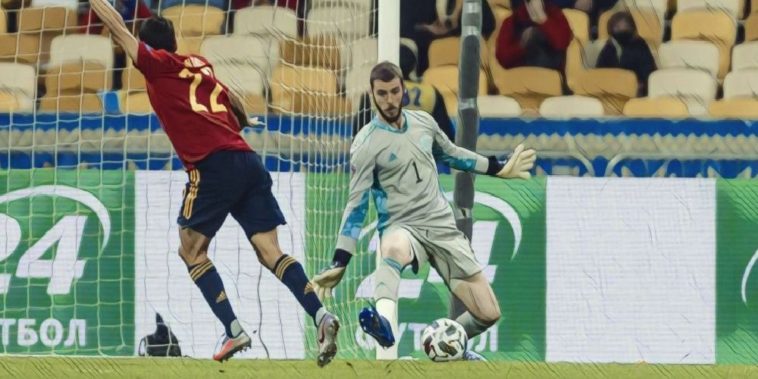 Spain suffered a shock 1-0 defeat in Ukraine as Viktor Tsygankov scored the only goal of the game on the counter-attack, with De Gea’s questionable positioning for the strike once again increasing the spotlight on the Manchester United number one.

De Gea has come under fierce criticism for both club and country in recent months but remains first-choice, though his latest error is only likely to increase calls for him to be replaced.

Shock on the cards 👀

Tsygankov beats a stranded De Gea from the edge of the box to put Ukraine ahead v Spain!

Enrique, however, has launched a defence of his goalkeeper and says criticism of the 29-year-old has become ‘a bad habit’ for the football media.

“You can always do more, but blaming De Gea is already a bad habit,” Enrique told reporters after they questioned the ‘keepers continued spot as number one.

“If David is blamed for a game like this, switch it off and we’ll leave.”

Spain largely dominated the encounter but struggled to carve out clear cut opportunities before being hit on the break by Tsygankov’s winner, marking an indifferent international break for La Roja after their unconvincing 1-0 win over Switzerland last week.

Enrique remains unconcerned by his side’s performances, however, and believes Spain did enough to secure all three points before Ukraine’s decisive breakaway goal.

“If you attack in a continuous way, you know there are transitions,” the former Barcelona boss added. “If a team defends and keeps it at 0-0, they grow, and in one action they’ve caught us. We have to congratulate them.

“Nothing happens because in one or two games you don’t score goals. We created chances to kill them off. It was a game clearly under our control, with opponents closing the passes and the passing lines.

“We created chances with Adama [Traore] through his overlapping. In the end, we went into panic mode. I’ve lost lots of these games in my career. The opponent is growing and then in a transition…

“The conclusion is I liked the attitude of the players. I like what I see.”

Spain remain top of their Nations League group – one point clear of both Germany and Ukraine – ahead of further clashes against Switzerland and the Germans in November.