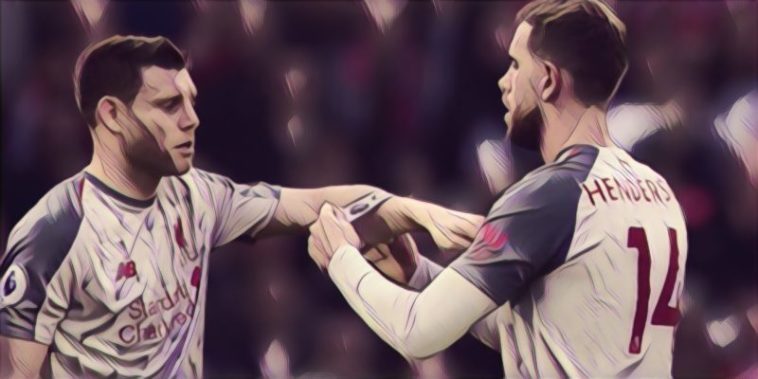 After Liverpool’s turgid and leggy performance in the Merseyside derby back in March, Jurgen Klopp came in for some rare stick from certain sections of the fan base. He was criticised for his seemingly stubborn refusal to hook Jordan Henderson and an over-reliance on throwing on James Milner as a plan B.

The German was barbed after the game, citing a need to control the game and not go gung-ho with a top-heavy attacking contingent, which would have left his side exposed. Klopp’s comments showed his desire to implement a more controlled, refined approach this season. The hard work and intense pressing game is still there, but the chaos is less frequent.

With this approach, so far, keeping his side right at Manchester City’s throats, it is little surprise to see Klopp opting so regularly, for his experienced English duo in the middle of the park. With so much at stake for the club, there is little doubt over whom Klopp has entrusted to be his reliable foot soldiers on the pitch, doing the stuff between the lines that so often gets downplayed and overlooked.

Ripples of excitements ran through social media before Liverpool’s game with Southampton on Friday night. Finally, Klopp had opted for the midfield trio the fans had yearned to see. Wijnaldum, Keita and Fabinho were thrust together to take on Southampton’s new look, intense pressing game.

The has been a clamouring all season long, from the Liverpool faithful, to see this exciting combination of three, unleashed and put to the test.

After half an hour though, those hopes and expectations had been severely tainted. Liverpool were trailing and being overrun. Keita’s instinct to get forward and be the fourth man in attack meant Fabinho had even more ground to make up, this was compounded by the visibly leggy, Wijnaldum, who’s fatigue left him exposed.

Keita’s first goal for the club was a relief for all involved, but it did not mask the need for more control and midfield nous. Klopp’s double substitution on the hour saw his trusted lieutenants thrown on to regain that central battleground and give his side a platform to build on.

The influence of Henderson and Milner in the hard-fought 1-3 victory at St Mary’s last Friday cannot be downplayed. The veteran duo gave more balance, shape, and graft to a side that needed to assert its superiority over a stubborn opponent.

Between them, they have played 752 Premier League matches and are consummate professionals in their trade. This kind of battling is in their DNA and they have no qualms about sacrificing the attacking aspect of their games, in favour of knuckling down and doing the unsung work.

As Klopp looks for a more controlled, refined approach it is little surprise to see both men, despite a plethora of signings, still playing such a key role for Liverpool this season.

Experience is the word bandied around when it comes to reliable, sturdy players like Milner and Henderson. Whilst you cannot deny their status as veterans, what Liverpool fans should really treasure is the trust that the manager has in them. He signed neither, and yet they remain major components to his high pressing machine.

This trust Klopp has in both players also explains why the likes of Keita and Shaqiri have been left out in the periphery of the German’s plans in so many big games. Both players will still have parts play, between now and the end of the season, however, it is Milner and Henderson who are currently shoe-ins for starting berths in the big games.

Where there are hard yards to be fought for, Shaqiri and Keita and the like can appear a bit more like luxury goods, yet to earn their stripes in Klopp’s demanding regime. There is no denying their quality, and either of the summer recruits are on their day, far more likely to be a match winner for Liverpool.

By comparison, Henderson and Milner’s contributions often go under the radar. They are even dismissed in some quarters for favouring the safe ball, or even lacking the ability to play a decent, forward pass.

Yes, when a defence is to be unlocked, a safe pass can be frustrating and you must have some capacity to find that killer ball. However, in a lot of situations, the safe pass is often the best option. Having the discipline to play that sideways ball when the ground is baying for something spectacular can so often be the difference.

Their match winners and superstar defenders will continue to get deserved headlines. However, it is clear that Klopp has placed a lot of faith in those steady, battle-hardened veterans, to help him get his side over the line in May. It’s faith that could well pay the sweetest of dividends for the manager and the Anfield faithful as they roll up their sleeves in these final, massive games in the club’s history.