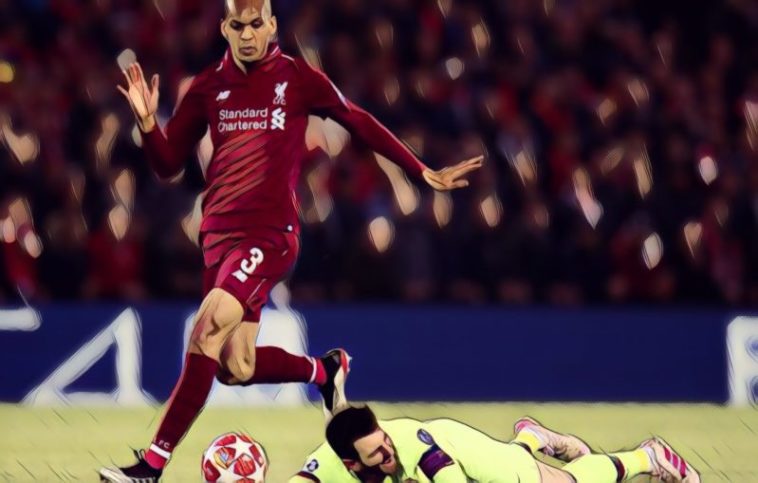 In a game where Liverpool needed everything to go right for them, having their defensive midfielder booked in the eleventh minute for hauling down Luis Suarez was not something that was going to help their cause when it came to trying to complete their mission impossible.

Knowing that conceding just one goal would probably be enough to kill any chances they had of reaching the final, the last thing Jurgen Klopp needed was Messi and company running at the Liverpool defence while his Brazilian stopper was walking a disciplinary tight rope.

Fast forward to the 91st minute as the ball is bouncing around in the Liverpool penalty box, as they try and repel Barcelona’s last-ditch attempts to salvage their Champions League dreams. The ball bounces to the best player in the world, he takes a touch, sets himself, and before he realises it, he is on the ground with the ball nowhere to be seen. Fabinho has just made another crucial tackle, and a potentially match-saving one at that.

It was a busy summer when it came to the signing of specialist midfielders, as Manchester City, Manchester United, Chelsea, Arsenal and Liverpool all set out to acquire a new face each in the centre of midfield. Manchester City had battled with Chelsea in a bid to tempt Jorghino to join Guardiola’s City revolution, but he opted to instead join up once again with Maurico Sarri at Stamford Bridge. Manchester United signed another Brazilian in the shape of Fred, from Shakhtar Donetsk.

Slightly under the radar came the signing of Fabinho, from Monaco to Liverpool. The move got most of it’s attention from the hefty price tag that was attached to it, a reported £43 million fee. Monaco had been famed over the last couple of seasons for selling off talented players such as Mbappe, Bernardo Silva and Benjamin Mendy, to name but a few.

Fabinho wasn’t the biggest name to come out of that team over the last few years, but the price tag made Liverpool fan’s sit up and take notice. On a preview show for Totally Football at the beginning of this season, French pundit Julien Laurens had tipped the former Monaco player to be one of the signings of the summer, and predicted he would become an invaluable asset to Jurgen Klopp and Liverpool. After not appearing for nearly half the season and since then becoming almost irreplaceable, the Frenchman’s prediction looks to be coming true.

A problem position for Klopp since he joined Liverpool had been the deepest midfielder at the base of his midfield. He had played Jordan Henderson their for the majority of the time, sometimes switching with James Milner, but for Henderson especially it was not his preferred position. He was sufficient against lesser teams but struggled when he came up against the best.

Real Madrid had a field day against him in the Champions League final last year; on more than one occasion, Luka Modric and Tony Kroos seemed to stroll by him with ease. Henderson as talented and full of running and endeavor as he is, was not the answer to this problem, and Klopp knew it.

To play as a defensive midfielder in the modern game is to nearly run the game. You are often the start of your team’s attacks and the end of the opposition’s. You need to be able to pick a quick pass, tackle, and see situations unfold before everyone else does on the pitch. These are all traits Fabinho has in abundance.

To see these qualities in action though, the Anfield faithful had to be patient and were made to wait patiently. It is often said that it takes player’s time to become accustomed with the style and pace if English football and that it can often come as a shock to them. This could have been the case with Fabinho as Klopp used him sparingly over the first few months of his career. He made his debut against Paris St Germain on September 18th and didn’t make a Premier League appearance until the back end of October. During his first few games he looked sluggish and slightly off the pace, but it wasn’t long before he came up to speed and started to justify his large price tag.

There are not a lot of players with the skill or discipline who could do what Fabinho did against Barcelona. Usually when a player in his position is carded early on, it has a drastic effect on how he can go about doing his primary job which is shielding the back four. Often you will see a player be subbed off after an hour, because the manager fears he may be sent off. When you are on a yellow and your main task is to break up the play around you then that’s always going to be a high risk.

Not when it comes to Fabinho though. His style of tackling and his capability to win the ball back without going to ground is fast making him one of the best players in his position in today’s game. His versatility is also a huge bonus as Liverpool have struggled with injuries in key positions throughout the current campaign. The Brazilian has slotted seamlessly into a centre-back roll on more than one occasion and has also filled in at right back, where he often played for Monaco.

It may have taken Klopp a long time to get the right man for the base of his midfield, as he focused on other areas of the pitch that needed considerable strengthening, such as the center-back and goalkeeper, but in Fabinho he has found the perfect piece to fit his midfield jigsaw. With Fernandinho coming to the twilight of his career with Manchester City, the mantle of the best holding midfielder in England could be yet awarded to another Brazilian for season’s to come.