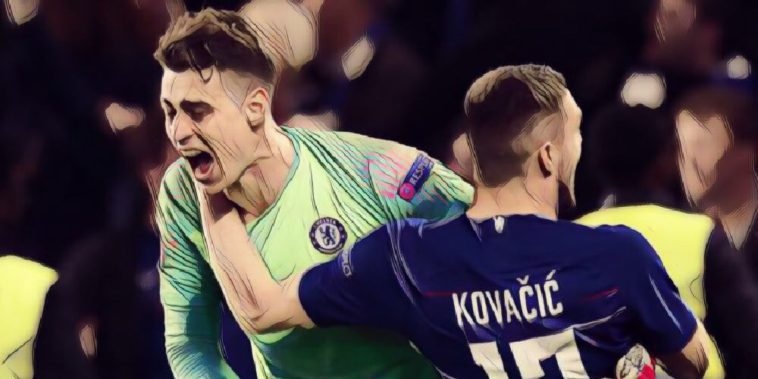 Chelsea hero Kepa Arrizabalaga has said his side were ‘lucky’ to progress to the Europa League final after he saved two penalties in the shootout.

After the 1-1 draw over in Germany last week, Ruben Loftus-Cheek gave Chelsea the lead just before the half-hour mark, only to see the highly sought after striker Luka Jovic level the scores shortly after the half-time interval.

The teams couldn’t be separated in 90 minutes, nor could anyone find the net in the additional 30 minutes of extra time, meaning that a place in the Europa League final would be decided by a penalty shootout.

Cesar Azpilicueta was the first to falter when his spot kick was tipped around the post, but Kepa Arrizabalaga’s unorthodox save from Martin Hinteregger got them back on terms. Kepa then saved Goncalo Paciancia’s penalty, leaving Eden Hazard to step up and secure Chelsea’s place in the final.

Speaking after the game, the Spanish keeper admitted that Chelsea’s progress to the Europa League final via the shootout was just ‘down to luck’

“Penalties are down to luck. Today we won and in the Carabao Cup final we lost, but this is football. Today was really good and we played against a very difficult team and we are very happy,” he told BT Sport.

“We always prepare for the penalty shooters before each game and today we are lucky. Wembley is in the past and I learned form it. I said I was sorry but we always keep moving forward and today was another game and we are happy to get to the final.

“Our season was a little bit difficult but we have reached two finals and we have qualified for the Champions League so I think it’s a good season. Now we will have a strong London derby with Arsenal in Baku.”

The Blues will face Arsenal in Baku, Azerbaijan on May 29th after the Gunners beat Valencia 7-3 on aggregate.