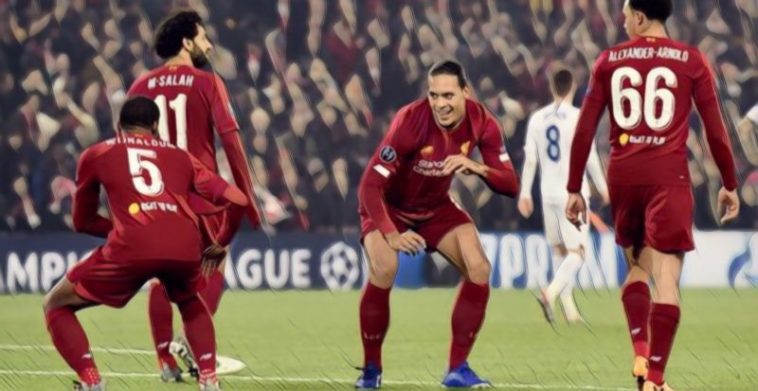 Liverpool have one foot in the Champions League knockout stages after beating Genk 2-1 tonight at Anfield.

It very much looked like it would be a routine win for Jurgen Klopp’s side against their Jupiler League opponents after Reds midfielder Gini Wijnaldum stabbed home from close range with 14 minutes on the clock.

However, much like when the sides met in Belgium last week Liverpool were far from their best and Genk would draw level just five minutes later via a thumping header from Mbwana Samatta.

Despite struggling to hit anything close to top gear the Reds would get the job done through Alex Oxlade-Chamberlain, who followed up his double against Genk during the last round, with a tidy finish on 53 minutes.

Speaking after the game Liverpool boss Klopp conceded it had been a tricky night for the Champions of Europe.

“We didn’t finish our situations in the way we could have done. We had a lot of shots and some really big chances that we usually use. We didn’t do that and it kept the game open. That gave them a lot of energy,” Klopp told BT Sport.

“It was a good goal from them. It kept them alive. In the end, if we only score one and they score one it’s a lot of effort. Ox [Oxlade-Chamberlain] got that wonderful goal but again, we don’t finish the situation. The players came through but you saw after a while it gets hard to get that rhythm and at the end of the game it was not there. We got a little bit of trouble but not really. It was job done.

“All the goals we have conceded have been completely different. These things we can summarise so it’s not about defending but about being 100% spot on in these situatuions. We know that and we need to work on that.

“We were the clear favourites tonight. If we scored two or three in the first half nobody would have thought that couldn’t have happened. But it went 1-1 and then it got tricky.

”But now we are all good. Tomorrow will be a nice recovery day for everybody and then prepare for Manchester City.”

Liverpool now sit on top of Group E on nine points and know a win against either Napoli at home or RB Salzburg away will see them progress to the last 16.