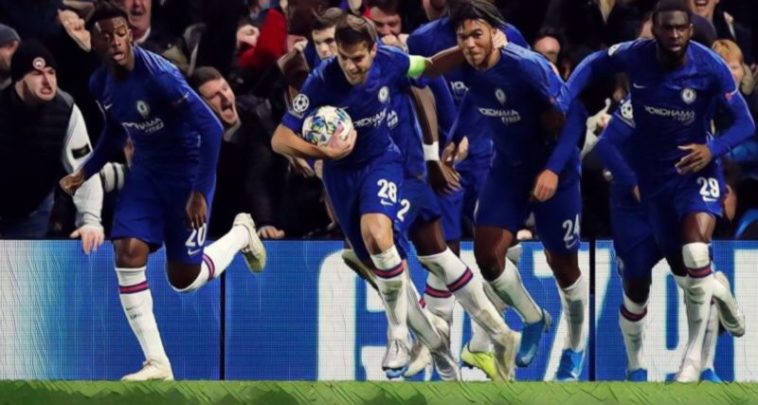 Frank Lampard admitted he has never been involved in a game quite like the one he saw his Chelsea side play out with Ajax tonight.

Hopes were high ahead of the game that these two exciting young teams would produce an entertaining game, and it’s fair to say they didn’t disappoint.

It took just two minutes for the deadlock to be broken with Tammy Abraham diverting a free kick into his own net to give the Dutch outfit the lead.

In what was to be a taster of a mad evening of football to come at Stamford Bridge, Chelsea burst forward from the restart, Christian Pulisic was taken down in the box and Jorginho stroked home the spot kick in trademark style.

Many felt Ajax’s performances would drop off this season after losing two of the stars of last season memorable run to the semi-finals, in Matthijs De Ligt and Frenkie de Jong, but the Amsterdam outfit once again produced their trademark slick attacking football and deservedly went ahead on 20 minutes via a stooping header from Quincy Promes.

Erik ten Hag’s side continued to dominate and would go in at the break 3-1 up after a wicked Hakim Ziyech free-kick came back off the post and bounced into the net off Chelsea ‘keeper Kepa Arrizabalaga.

Ajax showed no sign of relenting their control of game, and Chelsea seemed destined for a chastening home defeat 10 minutes into the second period, when Donny van de Beek slotted home after being played through by Ziyech.

9 – Hakim Ziyech has either scored or assisted in nine of his last 12 Champions League appearances (4 goals, 5 assists). Baller. pic.twitter.com/gPnNPw62Op

Chelsea began to push forward in search of a way back into the game and they would pull a goal back with 20 minutes to go through captain Cesar Azpilicueta, after some good work down the flank by the in form Pulisic.

The game then swung massively in the home side’s favour in the space of one mental minute, when Ajax had both their centre-backs Daley Blind and Joel Veltman sent off, with the latter given his second yellow after being adjudged to have handled the ball in the area.

Jorginho made no mistake from 12 yards and Chelsea would soon be level when impressive young full-back Reece James rifled home a fine half volley.

Azpilicueta thought he had won it for the home side just moments later, but his close-range effort was QUICKLY ruled out for handball after the referee watched a replay on the pitchside monitor.

Both sides pushed hard to find a winner in the closing stages, but in would end all square after a magnificent night of Champions League football in south west London.

3 – Chelsea are the third English side in Champions League history to come from three goals behind to get a result and the first since Liverpool in May 2005 (3-3 v AC Milan). Remarkable. pic.twitter.com/ew8IqhYzUT

Speaking afterward Lampard struggled to describe what he had just witnessed, although he did admit he happy to come away with a draw after being 4-1 down.

“I can’t explain the game. For all the things we might analyse back, the madness of the game, we are here for entertainment I suppose and anyone who watched that has to say what a game of football. Respect to Ajax, what a spectacle,” Lampard told BT Sport.

The scenes from Frank Lampard and the Chelsea fans at full time. Fair to say supporters are enjoying this season #cfc pic.twitter.com/NXhAmy6MPe

“We looked dangerous and I felt we would build momentum. I am not happy overall, this is the Champions League and we made too many mistakes.

“The biggest pleasure is the spirit the whole stadium showed. I can’t give you much on the red cards, I didn’t really see what they were for.

“At half time I would have taken a draw for sure. Let’s take it as what it was. I was expecting somewhere towards 10 minutes of added time, not sure where four came from.”

Chelsea and Ajax sit joint top of Group H on seven points after tonight’s game, with Valencia two points behind in third.