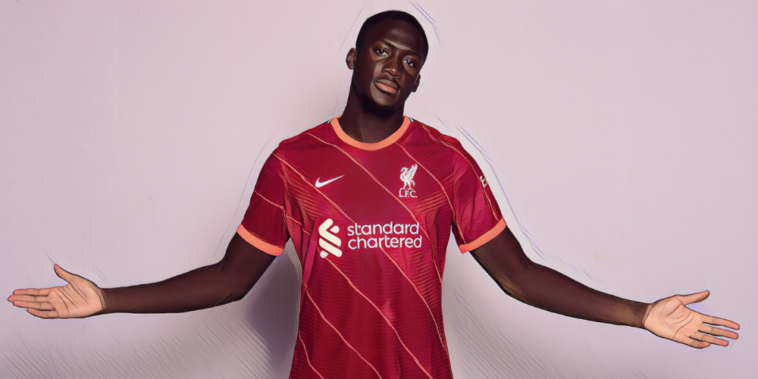 Ibrahima Konate has told Liverpool fans what they can expect of him following his move to the club, and says he is looking forward to the ‘challenge’ of the Premier League this season.

Konate became Liverpool‘s first signing of the transfer window earlier this summer after completing a £36m move from RB Leipzig, the centre-back arriving to strengthen the Reds’ defensive options ahead of the forthcoming campaign.

Jurgen Klopp moved to sign the towering 22-year-old after seeing Liverpool’s title defence ravaged by injuries at centre-back last season and Konate has now provided the supporters with an indication of what to expect following his arrival on Merseyside.

“I am big, I am strong and I am not scared with the ball!” he told the Liverpool official website.

“I can score more with my foot than my head, it is a little bit strange! This is me!

The France U21 international spent four seasons in the Bundesliga with Leipzig after signing from Sochaux as a teenager and admits he is now relishing the chance to test himself in English football and the intensity of the Premier League.

“Yes, I have watched some Premier League games and everybody knows there is so much intensity, strong players. This is difficult but I [will] love the challenge.”

Konate also described his excitement at playing in front of a capacity crowd at Anfield, with supporters expected to return ahead of the Premier League’s opening weekend.

“I cannot explain how excited I am for this moment. It is too much to imagine this.“

Liverpool beginning their campaign with a trip to face newly-promoted Norwich on August 14.