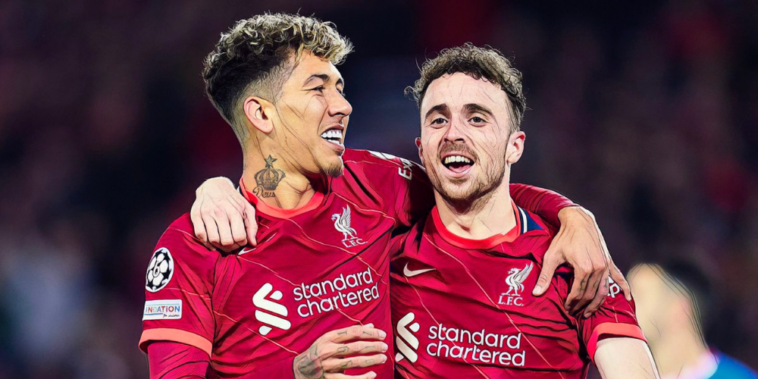 Pep Lijnders has provided an update on the fitness of Roberto Firmino and Diogo Jota ahead of Liverpool’ Carabao Cup final with Chelsea.

Firmino and Jota have faced a race against time to be fit for Sunday’s showdown with Chelsea at Wembley, with the former having missed out on recent wins over Norwich and Leeds with a muscular injury.

The Brazilian has again been ruled out ahead of the Carabao Cup final this weekend, but Liverpool assistant Lijnders provided a more positive update on Jota.

The Portugal international has not featured since being substituted with an ankle problem during Liverpool’s win at Inter Milan last week, though Lijnders revealed that Jota has a chance of featuring at Wembley.

“Bobby we have to see in the next two days. He will not be available. We hope he will be back soon,” Lijnders said at a pre-match press conference.

“So far no reaction on the things Diogo did, that’s a good sign. He isn’t ruled out, but it will still be a challenge.”

Liverpool can win a record ninth League Cup with victory over Chelsea this weekend and captain Jordan Henderson admits Jota’s availability would be a huge ‘bonus’ to his side’s chances.

“They’re two big players. It looks like Bobby is struggling. If Jota can play, that would be a bonus for us.”