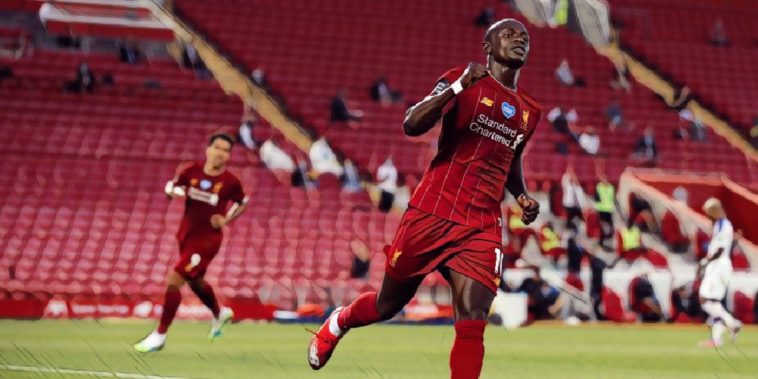 The Premier League champions returned to winning ways at Anfield this afternoon, toiling to a 2-0 win over relegation-threatened Aston Villa.

Having lost 4-0 to Man City in their last outing, Liverpool were once again far from their sensational best, against a resilient Aston Villa side who showed plenty of determination throughout the game as they look to get out of the bottom three.

However, despite a below par performance for the vast majority of the game, Jurgen Klopp’s side finally took the lead with 19 minutes to play. A neat pass from Naby Keita into the box found Sadio Mane, whose effort cannoned off the underside of the bar to put the hosts ahead.

The champions eventually doubled their lead in the dying stages of the game, a looped ball from Andy Robertson finding Mohamed Salah at the back post, whose cushioned header found 19-year-old Curtis Jones who fired past Reds legend Pepe Reina in the Aston Villa goal to seal the win with his first-ever Premier League strike.

Speaking to Sky Sports afterwards, Jurgen Klopp once again insisted he wasn’t focussing on breaking a number of records still available to them, while admitting his side weren’t at their usual sparkling best.

“We had to stay on track and do the right things and in the second half we had more of the good moments. You could see we needed time to get used to it. Two situations could have been penalties, we were unlucky but I’m fine – we are where we are because we win difficult games.

“The only thing I can say is there’s no chance to win records if you constantly think about records.

“We don’t want a record we want the three points. We don’t think about these things, three points is difficult enough. Today Aston Villa was fighting with all they had and it makes life uncomfortable. I like it, it was not a brilliant performance but it was a good performance that gets us three points.”

Meanwhile, Dean Smith was understandably disappointed at his side’s defeat following all of their endeavour, conceding they ‘never found the quality in the final third’.

“I’m disappointed,” Smith told Sky Sports. “I don’t want to be a valiant loser, we’re scrapping for points. To out-shoot Liverpool at home at Anfield, in terms of efforts on goal, it’s excellent – but need to take our opportunities. We never found the quality in the final third they did.

🗣 "They are a lucky team for me, hopefully they will stay up and i'll score more goals and more 3 points against them"

Sadio Mane on his record against Aston Villa pic.twitter.com/VYNZc5i13s

“Was it the best time to come to Anfield? Jurgen Klopp teams don’t take their foot off the gas, I don’t thank him [Klopp] for bringing the three subs on, that strengthened them but we were in the game the whole way through. Unfortunately they beat our press with their quality in the end.

“It’s a tough task but we’re still in it that’s for sure. Our performances since the restart haven’t got the results they deserved. We have got to make the most of our chances. We need to keep the belief in the dressing room, it’s some achievement to come here and play as we did but we have to maintain the belief. I thought we more than matched them.”

Liverpool return to action on Wednesday night when they face Brighton at the Amex, while Villa host an in-form Manchester United side on Thursday, Dean Smith’s men remaining a point adrift of 17th placed Watford.

See also – Tweets of the Week: Liverpool bantered, Premier League stepdads and who is Luke Garbutt?