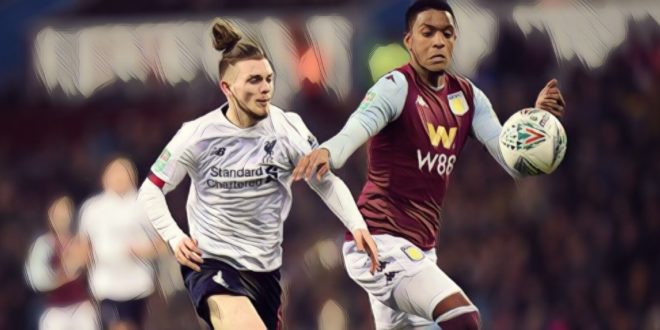 Aston Villa ruthlessly dispatched of Liverpool’s youngest-ever side to book their place in the Carabao Cup semi-finals with a 5-0 victory at Villa Park.

Liverpool’s involvement in the Club World Cup this week saw their options restricted for their last-eight tie at Villa, with a team managed by development side coach Neil Critchley suffering a chastening defeat against the clinical hosts.

The inexperienced Merseysiders, featuring five debutants and six teenagers, began brightly and battled valiantly against their more senior opponents, though two quick-fire goals in the first-half put Dean Smith’s side in charge.

Kodjia would score twice before the break to make it four before substitute Wesley added a fifth in second-half stoppage time, though the scoreline would flatter Villa who were pushed hard by the youthful Reds.

Stand-in manager Critchley was full of praise for his side’s performance following the clash, 16-year-old Harvey Elliott the stand-out for Liverpool, and revealed his pride at the club’s display despite a disappointing result.

“I thought we were magnificent,” Critchley told Sky Sports.

”We were fantastic from the start, we had a couple of chances from the first whistle. We were really unfortunate to concede and find ourselves 2-0 down. It was an incredible night and no one wanted it to end. The support we had was unbelievable.

“The conduct of the Villa players was first class. For Dean Smith and John Terry to come in to our dressing room after the game and say the things they said. They said ‘keep going, good luck’ and wished us the best. The moment I will remember and the players will remember for the rest of their lives.

“Some of them showed the potential to one day play for us, or in the Premier League. They will know it was just part of their journey. My overwhelming feeling was one of immense pride.”