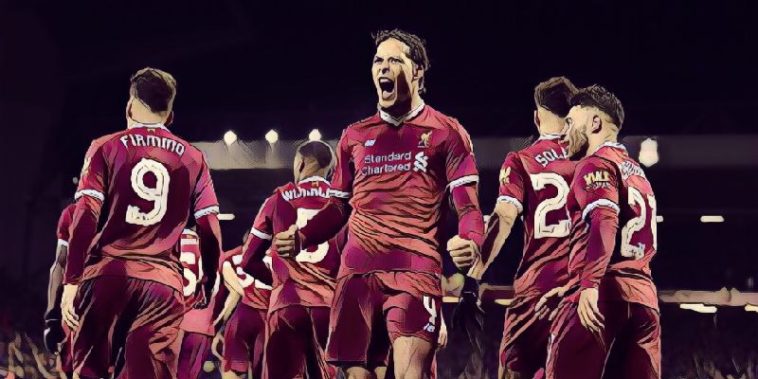 The third round of the FA Cup finally arrived and it served up a feisty Merseyside derby. With Liverpool coming out on top against their city rivals, here’s five things we learned.

With Michael Keane out injured Sam Allardyce chose to play youngster Mason Holgate at centre back. Everton had Ashely Williams on the bench but opted not to use him. That meant that Holgate had Sadio Mané and Roberto Firmino to contend with.

Holgate certainly didn’t hold back. He was at fault for the penalty decision that put Liverpool in front. Whilst it may have been soft, the naïvety of the young Toffee was evident as he got too tight to Lallana.

Not long after that mistake Holgate needlessly and petulantly pushed Firmino in to the crowd. At the moment it’s unclear if Firmino angered Holgate in some way but Holgate was furious with the incident. The youngster had to be restrained by his Everton teammates.

In the end it proved too much of a task for Holgate as his Everton side were beaten. Whilst Holgate impressed sporadically, overall his inexperience showed. It’s surprising that a manager of Sam Allardyce’s experience chose to field a youngster rather than Williams. That decision may have cost his team but it at least shows the faith that he has in the clearly talented Holgate.

The world’s most expensive defender, Virgil van Dijk, made his Liverpool debut in the Anfield lights of an FA Cup Merseyside derby. With the £75m transfer fee looming over him and the pressure of a cup derby he never let that get to him.

Virgil van Dijk was brought in to bolster the Liverpool defence and that he did. He instantly made Matip look inferior and showed the Anfield faithful what they’ve been missing. That’s not the only thing they learnt though. The Dutchman was a constant threat to Everton all evening from set pieces and will certainly be a major asset to Liverpool going forward.

There can’t be many better times to score the winning goal than late on in a Merseyside derby, in the FA Cup on your debut. Virgil van Dijk showed that for £75m Liverpool haven’t only got a brilliant defender, they’ve also got a menace at set pieces.

From the get-go Wayne Rooney’s mentality was reminiscent of derbies gone by. He spent much of the game flying in to challenges which earnt him an early yellow card. Whilst the fans may appreciate his passion it was consistently detrimental to Everton’s game.

Everton looked to press the Liverpool backline frequently especially with van Dijk not yet settled in to life at Liverpool. However, after the good pressing work of Everton Rooney had a tendency to go in too hard and give away freekicks. All that did was make the Toffees’ pressing futile as it ended with Liverpool having time and space to play their way out from the back.

Rooney’s game was eventually cut short after he was taken off shortly in to the second half. Presumably that was for his own and Everton’s sake. Sam Allardyce likely had a word with Rooney about his temperament at half-time but with Rooney seemingly unwilling to settle down Allardyce was left with no choice but to take him off.

Battle of the Young Goalkeepers

Loris Karius who was awarded his usual starting role in the cup games and Everton ever-present Jordan Pickford each had their reasons to impress.

After Simon Mignolet’s horror-show against Arsenal, conversation reignited that Liverpool should call time on his starting role. So, with the FA Cup finally here that gave Loris Karius a chance to make a claim for that starting spot.

Due to Everton’s style of play, Karius didn’t have a lot to do. However, most of what he did have to do was very good. Despite that he still made something of a blunder midway through the second half as he dropped the ball from an Everton freekick. Everton couldn’t capitalise but it doesn’t fill the Liverpool defence with confidence in their ‘keeper.

Meanwhile, Pickford has established himself as a quality ‘keeper for Everton and has his sights set on becoming England’s number one following Joe Hart’s downfall.

Pickford has been very impressive of late and was even in our team of the month for December. However, this is not a game he will look back on with much pride. Pickford never looked assured during the game and was consistently second guessing himself.

He would frequently come out to close down only to backpedal to his goal. That eventually cost him as he was responsible for coming to claim the ball at a Liverpool corner. Virgil van Dijk got there ahead of him which ended up being the deciding factor of the match.

No Salah, No Coutinho, No Problems

Mo Salah and Sadio Mané were at an awards ceremony the day before the game where they picked up first and second best African player respectively. Amazingly Mané made it back in time to start for Liverpool although Salah was ruled out through injury.

Despite Liverpool missing their best two players this season they still looked threatening going forward. That is impressive considering how strong Everton have been defensively since Allardyce took charge.

Salah arguably could have made this a more comfortable win for Liverpool but there are doubts over the impact of Coutinho. The Brazilian is regularly injured legitimately and dubiously but Liverpool are fine in his absence. That begs the question whether it is really that much of an issue when he gets his inevitable move to Barcelona.