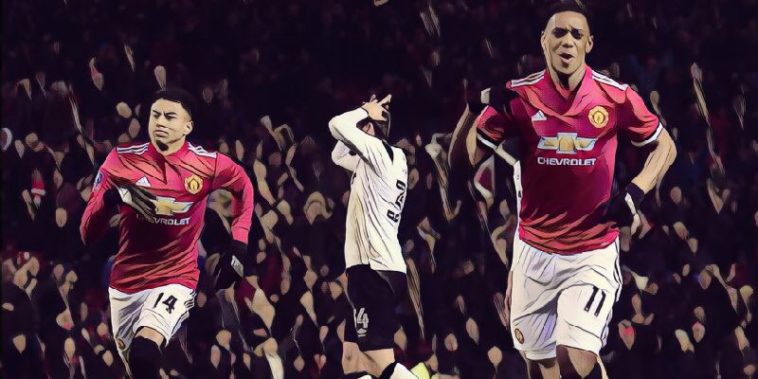 Jesse Lingard scored another screamer, before Romelu Lukaku put the game beyond doubt in an entertaining FA Cup third round game at Old Trafford.

Derby gave a good account of themselves, occasionally threatening on the counter, but United slowly turned up the pressure. Marcus Rashford struck the post once in each half, and once Lukaku and Anthony Martial were introduced into the fray, the Red Devils were banging on the door. With six minutes to go, Lingard came up good yet again, controlling and then smashing a shot into the top corner from the edge of the area. With Derby piling forward to find an equaliser, Martial and Lukaku combined on the break to finish off the Championship side.

Where did it all go wrong for Henrikh Mkhitaryan? Bereft of confidence, the Armenian looks a shell of his former self. Here his poor run of form continued. There was the occasional nice touch, including a lovely cross that Rashford headed onto the post. However, these bright moments were few and far apart in another insipid half. Just like his last start against Southampton, he was brought off at halftime. No one in red will have complained. Mkhitaryan has played himself out of the squad, and his nadir has coincided with the rise of Lingard, essentially locking him out of the starting eleven.

Mourinho switched his formation to a 4-3-3 against Everton last time around to great effect. Here, he set up the team in a similar fashion. This formation brings the best out of Paul Pogba, allowing him to play closer to goal. Juan Mata and Lingard can drift in from the wide positions to support the central forward, leaving plenty of space for wing-backs to run into. Going forward, it might just be the best possible setup for United, as it allows them to fully utilise their expensively assembled arsenal up top.

Derby go out with their heads held high

The Rams can hold their heads high. They held out for 84 minutes against United, and for long periods of the game, they gave as good as they got. Sitting second in the Championship, they have a very real shot at promotion. If this game is anything to go by, the will not be out of place in the Premier League. They have a good core of players with top-flight experience, and have shown that they do not have to sacrifice offensive threats for defensive organisation.

Carson was arguably the best player on the pitch. Saves from Mata, Pogba, Rashford and Lingard and kept Derby in with a shout. He could have perhaps done better for Lukaku’s goal, but he covered himself with glory throughout the game. The 32-year-old former England international was Derby’s player of the season last year, and continues to prove his worth.

Lukaku’s goal will do him a world of good

The big Belgian made his return after being stretchered off against Southampton, and marked it with a goal. For the first time since November, a Lukaku goal was accompanied by a Lukaku celebration. The enforced absence may have been good for him, as he looked well rested and hungry. The goal should improve his confidence in front of the net, and with the rest of the team clicking in the new 4-3-3 formation, things might finally be looking up for United’s number 9.