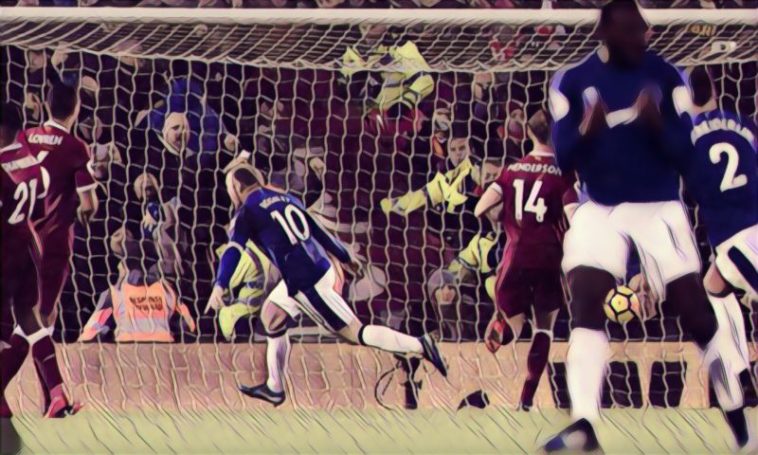 Despite all the hype, the 229th Merseyside derby ended up a fairly underwhelming game with an Everton penalty – their first at Anfield since 1988 – converted by Rooney, resulting in the points being shared at Anfield. Here are five things we learned.

Everton give Liverpool the blues with disciplined performance

This was a smash and grab for Everton, without the smash. The Blues were happy to soak up the pressure and were set in their ways from start to finish, holding the line with two banks of four. It may not have been pretty, but it was effective.

During the game Everton had just 21% possession, their lowest figure in their Premier League history since 2003/04. On top of that Everton had just three shots (two of which were on target), one corner and completed zero dribbles.

However, despite how poorly Everton played, Allardyce’s tactics of shutting up shop frustrated the home side and worked in Everton’s favour. Even though Liverpool had 79% of the possession and 23 shots they only managed a poor three shots on target, showing their failed attempts in trying to break down the Everton back-line.

Many people will have a negative opinion on the way Everton played at Anfield but it got the Blues an important point and was miles away from the performances under previous managers such as Koeman and Martinez who were opened up by the Reds in past Anfield derbies.

Although Everton’s result is one that many Everton fans will be happy with, it still means that Everton are waiting for their first win at Anfield in 18 years.

Everton put in a solid defensive display but couldn’t repeat the heroics of the Kevin Campbell winner all the way back in 1999. Since then Everton have experienced some pretty horrific results, including a 3-1 loss last season and two back to back 4-0 defeats.

The Anfield record isn’t the only poor record hanging over Everton’s head at the minute. The blues also haven’t managed to beat Liverpool at all since 2010, when goals from Tim Cahill and Mikel Arteta gave the blues the three points.

The result now means that Liverpool have equalled their longest-ever unbeaten run against Everton in all competitions, which is 15 games. A record that was set between March 1972 and April 1978. With the Merseyside derby returning for round two in January for the FA Cup, Everton have a chance to prevent the Reds from beating it.

So far in his Liverpool career Mo Salah has scored 19 goals in just 24 appearances and in the game against Everton he was clearly the difference.

Scoring the first goal and coming up against an out of position Cuco Martina, the Egyptian was running the show and making mincemeat of the Curacao captain and it looked highly likely that he was going to be the game changer.

However, after Klopp decided to take him off in the 67th minute Liverpool seemed to massively drop off and their threat seemed to ease as Everton looked more comfortable at the back.

Another questionable decision was dropping Firmino and Coutinho from the beginning. The pair have so far scored 21 goals between them this season and it was clear Liverpool were missing them as they struggled to break down a solid Everton defence.

Solanke’s inclusion, taking Firmino’s place in the process, didn’t work out as he struggled to get into the game. There will now be some questions over Klopp as to whether his decisions cost Liverpool the game.

Jonjoe Kenny recently went on record for saying he would have swapped his World Cup win for a win in the derby at Anfield and his performance today showed that he clearly meant that when he said it. Putting in a man of the match performance, he was inspirational in making sure Everton came out of the game with a point keeping Mane fairly quite throughout the game.

Jonjoe Kenny was also joined by the captain for the game Wayne Rooney, who certainly gave his all for the cause. Rooney scored the equaliser from the spot to score his first goal in a Merseyside derby and give Everton the all-important point.

Rooney’s goal now means he’s scored the same number of league goals as the player he replaced, Romelu Lukaku, with eight goals. He is also the first Liverpool born player to score in the derby since Francis Jeffers in April 1999. Allardyce will now be hoping the pair can repeat their performances in January for the FA Cup game.

When Liverpool first signed Lovren from Southampton he looked an extremely promising defender. However, three years into his Liverpool career and Lovren is certainly not a fan favourite down in Merseyside, with the penalty he gave away a sign as to why Liverpool fans have such a distrust in him.

The penalty mistake will certainly not help his chances of regaining any of the fans trust and with Liverpool trying to sign a centre-half last summer before failing, this mistake from Lovren may well force Klopp’s hands to spend some money in January.