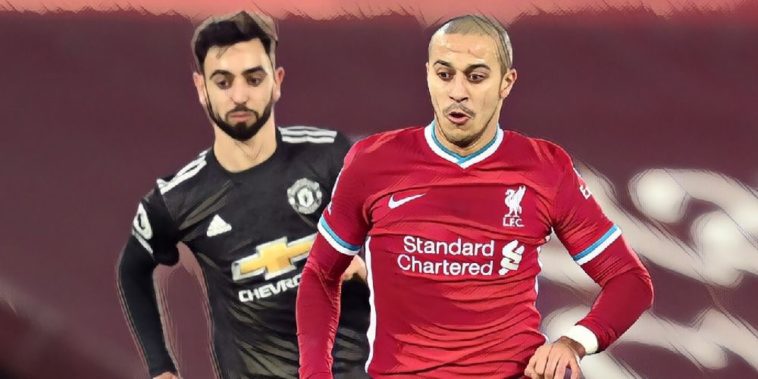 Sunday’s top of the clash between Liverpool and Manchester United somewhat predictably failed to live up to the pre-match hype.

That being said it was a decent spectacle despite the lack of goals, and both sides will reflect on the game thinking they could perhaps have come away with more than a single point.

Man Utd grew into the game after a shaky opening 20 minutes and Bruno Fernandes and Paul Pogba will both spend this evening rueing the fact they gave Reds keeper Alisson the opportunity to pull off impressive saves when presented with excellent chances from close range.

Let’s see how the players rated…

Showed exactly why many rate him as the best goalkeeper in the Premier League by pulling off two crucial close-range stops from Fernandes and Pogba in the second half.

A couple of delicious pinged switches aside, today was another display that showed the 22-year-old’s level of performance has dropped way below the standard’s he has set over the previous two campaigns.

What a player. To consistently perform at the level he has over recent months at centre half really is something special. Dealt with the threat of Rashford easily and distributed the ball well from the back.

Fabinho since he moved to centre-back pic.twitter.com/JJFbT6aSuX

Man United’s hopes of exposing the second Liverpool midfielder stationed in the centre of defence never quite materialised. All-in-all the Reds skipper coped admirably in a position he clearly isn’t comfortable in.

Solid in defence and brought his trademark energy and quality going forward. Was unlucky not to bag an assist with a wonderful whipped delivery into the area in the second half.

Brought in to find space between the lines and the Swiss playmaker certainly did that. Was lively in possession and went close with a couple of efforts from distance early on.

Started the game with a classy turn and ping out to Alexander-Arnold and looked likely to dictate proceedings from his deep midfield role. The Spaniard’s influence did wane as the game wore on, but he continued to work tirelessly and forced de Gea into a decent stop with a stinging long-range effort late on.

Controlled the game on his home debut 💫 pic.twitter.com/6iSL4MD5sM

Neat and tidy in possession, but like many of his teammates the intensity of his press dropped off after the first half-hour.

A busy but largely ineffective display from the Egyptian. Struggled to get much change out of the impressive Shaw, with his best period coming during the opening period when he briefly swapped sides with Mane.

Twice failed to play Robertson in early on when the left-back was in acres of space and scuffed a decent chance from 10 yards out. Like the other members of the Reds feared front three, the Brazilian just isn’t firing on full cylinders at the moment.

Showed excellent movement to get in behind the United backline early on. However, Mane’s performance was another from a Liverpool attacker that falls into the lively but ineffective bracket.

Brought some added energy and urgency to the Reds midfield after his introduction. Will be massively disappointed not to have been given the nod from the start.

Despite Liverpool dominating for large parts, Man United’s number one was never really forced into a save of note. Dealt with anything that did come his way with a minimum of fuss.

Did really well one-on-one with Mane and overall put in a solid defensive shift. Massive improvements are needed in terms of his ability in possession though, where he often telegraphs where he will play the ball and puts teammates in trouble.

Excellent. His selection over Eric Bailly caused consternation amongst United fans pre-match, but the Swede barely put a foot wrong. One brilliant clearance from a drilled Alexander-Arnold cross a highlight of an impressive display.

Recovered from a shaky start where he almost cost his side with a stray cross-field pass, to put in an accomplished display. Will be disappointed he wasn’t picked out from any of his sides corners though, with United having a noticeable height advantage at set-pieces.

One almost costly misplaced pass aside, this was Shaw’s best-ever performance in a Man United shirt. Defended the threat of Salah superbly and surged forward with real purpose when in possession.

A key player with and without the ball. 🔑 pic.twitter.com/kyZlF1lCr2

The academy graduate was chasing shadows for the first 20 minutes, but improved as the game went on and showed some impressive distribution to switch the play on a couple of occassions.

Much like McTominay the Brazilian improved after that initial early spell when Liverpool dominated. Stuck to his task well in the centre of the park and finished the game strongly.

Put in a big shift for his side in an unfamiliar role on the right wing. Competed well throughout but was guilty of attempting the Hollywood pass at times when the simple option would have been wiser. Missed the best chance of the game late on when he blasted straight at Alisson from six yards out, when he surely needed to strike across the ‘keeper.

Went close with a whipped free-kick from 25 yards in the first half, but let’s not dress this up Man United’s most influential player had a stinker. Either gave the ball away or picked the wrong option every time he gained possession and missed a decent close-range chance.

Ok. Kept possession well at times and went on one brilliant run early on when he beat three Liverpool defenders. Linked up well with Shaw and probably would have been left on had he not been a fitness doubt before the game.

Poor. Needlessly caught offside way too often during the first period and link-up play was non-existent as the central striker. Moved to the left for the last half hour but his general play remained sloppy.

Linked the play well after his introduction, but was never got that chance he craved.