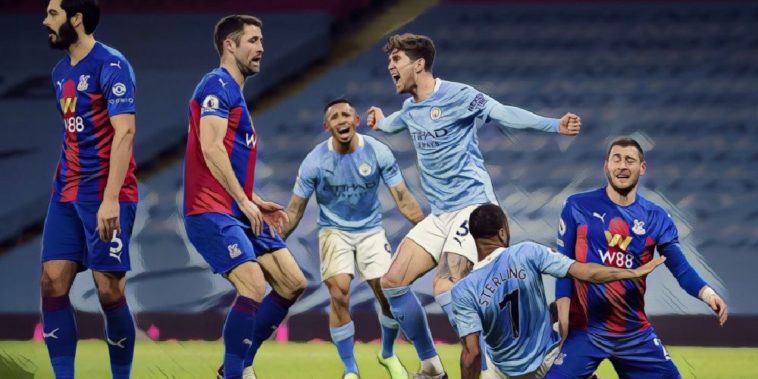 John Stones bagged a brace as Manchester City ran out convincing 4-0 winners over Crystal Palace to move themselves up to second in the Premier League.

It was utter domination from the off from Man City, who finally took the lead in the 26th minute. Kevin de Bruyne’s corner was cleared by Luka Milivojevic, though only to Raheem Sterling who sprayed the ball back across the field to the Belgian. De Bruyne expertly controlled the ball before delivering a sumptuous outside-of-the-boot cross into the box which was thumped home by the head of an unmarked John Stones from six yards to make it 1-0.

11 minutes into the second half and City had their second in superb style. Milivojevic this time cleared Bernardo Silva’s corner to Andros Townsend, though the Palace man was dispossessed by Ilkay Gundogan before the German unleashed a sensational curling strike into the top corner from 20 yards.

Guardiola’s side continued at their relentless pace, pressing the Eagles all over the pitch and really deserved more goals, but in the 68th minute, they had their third. Again it came in the second phase of play following a corner as Ruben Dias’ initial header was saved by Guaita though the Spaniard parried his save right into the middle of the box, with centre-back Stones reacting quickest to fire home his second of the evening.

Raheem Sterling rounded off the scoring with two minutes to play, the 26-year-old curling a sublime free-kick into the top corner, beating Guaita on his side of the goal to net his first ever free-kick.

Speaking afterwards, Pep Guardiola was delighted with his side’s creative players, while also crediting the improvement of his side’s defence.

“We didn’t concede, we had to be patient and Palace defended really well. We were so stable, it is an important victory,” he told Sky Sports.

“When we handle top teams we are fortunate to have this quality. In the final third when Kevin de Bruyne makes the assist, Ilkay Gundogan and Raheem Sterling put it in the top corner, and John Stones was on fire in the box. It’s easy for me when you have these players.”

Aside from his brace, John Stones has enjoyed an excellent renaissance this season alongside summer signing Dias – the pair conceding just one goal in the 10 games they have started together this season – and Guardiola was delighted for the man who has been affectionately dubbed ‘The Barnsley Beckenbauer’.

“We try to play the same way we have in the last few seasons and in the back four we don’t make mistakes. Last year we made a lot,” he added.

“Last year was the worst – before we were always solid behind, it is just individual quality. Ruben has helped a lot.

“If there is one player I am more than pleased that everything is going well, it’s John Stones. He is playing because he deserves it.”

The result moves Man City into second in the Premier League, two points behind league leaders Man Utd with a game in hand to put them firmly in contention for a third title in four years under Guardiola.