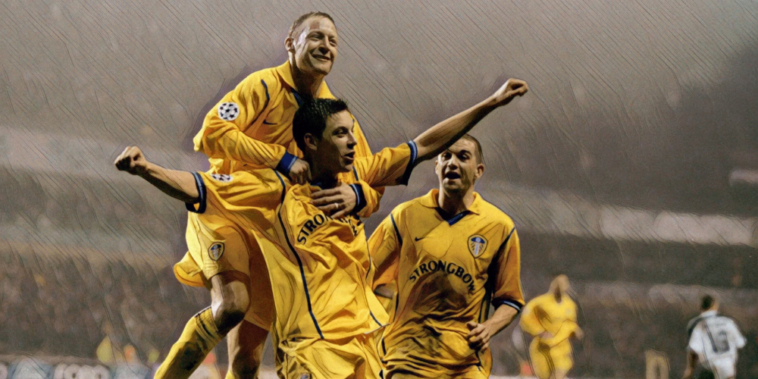 Leeds enjoyed one of the most memorable periods in their history during the early 2000s, as David O’Leary’s talented young side took on the best England and Europe had to offer.

Leeds were riding a wave of momentum at the turn of the new millennium, a collection of exciting academy graduates and series of shrewd signings having provided O’Leary with a side capable of challenging for silverware.

Having reached the semi-finals of the UEFA Cup the previous season, Leeds upset the odds to reach the Champions League’s last four in 2000/01, a run which included memorable clashes with Barcelona, AC Milan, Real Madrid and Deportivo La Coruna.

It was a time in which Leeds dared to dream, one which pre-dated the financial implosion that set the club back almost two decades.

Leeds’ run eventually came to an end with a two-legged defeat to Valencia in the semi-finals, though their Champions League campaign was one that has since lived long in the memory for those who followed it.

We’ve decided to look back on the side that memorably reached the Champions League’s latter stages, here is the starting XI from the club’s semi-final defeat to Valencia at the Mestalla.

Martyn was an experienced figure in a side brimming with the fearlessness of youth, with the goalkeeper one of the Premier League’s best at the turn of the millennium.

He signed for Leeds from Crystal Palace in 1996 and was a key player in their rise under O’Leary, making 273 appearances in all competitions and being named in the PFA Team of the Year in three consecutive campaigns.

Martyn produced superb performances during a memorable group stage win over AC Milan at a rain-soaked Elland Road, with another display of shot-stopping preventing a Deportivo La Coruna comeback in the second leg of the quarter-final win over the Spanish champions.

Leeds signed Danny Mills from Charlton with the combative right-back replacing the veteran Gary Kelly in the side, impressing during the club’s run to the Champions League semi-finals.

Mills’ performances for Leeds earned him inclusion in the England squad for the 2002 World Cup, where he started each of the Three Lions’ five fixtures in the absence of the injured Gary Neville.

Mills was allowed to leave in 2003 following a fall-out with manager Peter Reid, initially signing on loan for Middlesbrough before departing for Manchester City on a permanent basis.

He made 141 appearances in all competitions before joining the wealth of exits as the club’s reckless spending led to financial implosion.

Dominic Matteo became a fans’ favourite during his first season with Leeds in 2000/01, including scoring the goal that secured the club’s progression from a Champions League Group of Death that included Barcelona, AC Milan and Besiktas.

Matteo’s near-post header is a goal still sang about on the Elland Road terraces, one which secured a 1-1 draw with AC Milan at the San Siro and saw Leeds dump out Andriy Shevchenko, Paulo Maldini and co to reach the second group stage.

🔥 “A prestige goal in a prestige match” #OnThisDay in 2000, Dominic Matteo scored THAT goal at the San Siro against @acmilan pic.twitter.com/9Mx87V8UYg

The centre-back enjoyed the best period of his career at Leeds after arriving from Liverpool, making 146 appearances before spells at Blackburn and Stoke.

Ferdinand became an integral member of the Leeds side that reached the Champions League semi-finals, having become British football’s most expensive player – and the world’s costliest defender – when signing from West Ham in an £18m deal.

Ferdinand became one of the Premier League’s best defenders during his time with Leeds and enjoyed some memorable moments, including scoring during the club’s famous 3-0 win over Deportivo La Coruna in the Champions League quarter-finals.

The defender later admitted his time with Leeds was the most enjoyable of his career, despite winning six league titles and the Champions League following another British record transfer to Manchester United in 2002.

“I loved it at West Ham but we didn’t win that much, I loved it at Man United, we won a lot but with that came a lot of pressure,” Ferdinand told BT Sport.

“So the enjoyment factor isn’t as free-spirited as it was when I was here at Leeds where we won a fair amount in terms of games, got to some good heights, Champions League semi-final etcetera, and there wasn’t that added pressure or expectations with it.

“We were a young squad, all good lads, all socialised together as well and I just had some fantastic times here, really enjoyed my football here, enjoyed my time, the people were great.”

Ian Harte was a fixture in Leeds’ talented side across the turn of the millennium, spending nine seasons at Elland Road and making 288 appearances.

The former Republic of Ireland international enjoyed the best season of his career in 2000/01, scoring 11 goals with his threat from set-pieces crucial to David O’Leary’s side.

Harte scored a brilliant free-kick to open the scoring as Deportivo La Coruna were beaten in the quarter-finals and the defender admitted the togetherness and fearlessness of Leeds led to an unforgettable period.

A magical night at Elland Road 💫

“It was unbelievable,” Harte told FourFourTwo of that side. “Mostly it was a group of young lads who had come up from the academy, who were really hungry to go out and do the best they could.”

Olivier Dacourt had been one of the few high-profile additions from foreign leagues, signing the former Everton midfielder from Lens in a £7.2m deal that broke Leeds’ transfer record at the time.

The France international provided a combative presence in the engine room of O’Leary’s side and spent three seasons at Elland Road, before moving on to spells with Roma and Inter Milan following a fall-out with Terry Venables.

He won two league titles with the latter and ended an international career with France with 21 caps.

David Batty provided an experienced presence at the heart of a Leeds side brimming with potential, having returned for a second spell at his boyhood side after stints at Blackburn and Newcastle.

Batty had formed part of the Leeds side that won the First Division title in 1992, before adding a second top-flight winners’ medal during a successful spell with Blackburn.

The streets will never forget the Leeds United team that got to the Champions League semi-final. Full of ballers 🔥 pic.twitter.com/QUxFwokoiT

The midfield enforcer brought bite to the engine room during Leeds’ memorable European run and he made 373 appearances for the club across his two spells, in addition to winning 42 caps for England

Eirik Bakke was an underrated presence in O’Leary’s Leeds side, having become an influential figure following his arrival from Norwegian side Sogndal.

Bakke was a hard-running midfielder capable of operating centrally or in a wide role, bringing energy and commitment to the team across his seven seasons at Elland Road.

Bakke earned inclusion in the side against Valencia following Lee Bowyer’s suspension, with the midfielder having been banned for stamping on Juan Sanchez’s chest during the goalless first leg.

Bowyer had been named as Leeds’ Player of the Season for 2000/01 after scoring 15 goals in all competitions. Six of those goals came in the Champions League, a haul that was second to only Real Madrid forward Raul.

Harry Kewell was arguably Leeds’ most exciting talent after arriving from Australia as a teenager, emerging from the club’s academy system to become a key figure in O’Leary’s adventurous side.

Kewell missed much of the early season with an Achilles injury but returned to play a prominent role in their Champions League campaign, providing two assists in the 3-3 draw at Lazio that secured progression from the second group stage.

Winner of the PFA Young Player of the Year award the previous season, he made 242 appearances for Leeds and scored 63 goals in total before leaving for Liverpool amid the club’s financial crisis.

Kewell won the FA Cup and Champions League during his time at Anfield but saw his impact hindered due to a succession of fitness issues.

Alan Smith enjoyed the best season of his career during Leeds’ run to the Champions League semi-finals, scoring 18 goals in all competitions and forming a fine partnership with Mark Viduka in attack.

O’Leary had warned Smith that his temperament was getting in the way of his talent ahead of the 2000/01 season, with the forward responding in impressive fashion to enjoy an unforgettable campaign.

Smith’s tireless work-rate and commitment saw him become a huge fans’ favourite after making his debut as a teenager and he was named as the “Supporter’s Player of the Year” in consecutive campaigns in 2003 and 2004.

The forward departed in controversial fashion to sign for Manchester United following Leeds’ relegation from the Premier League in 2004, a move which soured his relationship with the club’s support.

Leeds secured the signing of Mark Viduka from Celtic ahead of the 2000/01 season, spending £6m to bring the Australian to Elland Road.

Viduka had scored 27 goals to be named as the Scottish Premier League’s Player of the Year during his first full season at Celtic and hit the ground running after moving south of the border.

Viduka’s first season saw him score 22 goals – including all four in a 4-3 win over Liverpool – and his mix of power and technical talent provided Leeds with a perfect focal point.

He scored 72 goals in 166 appearances for Leeds and was key to their Champions League run, netting goals against the likes of Besiktas, Anderlecht, Real Madrid and Lazio.