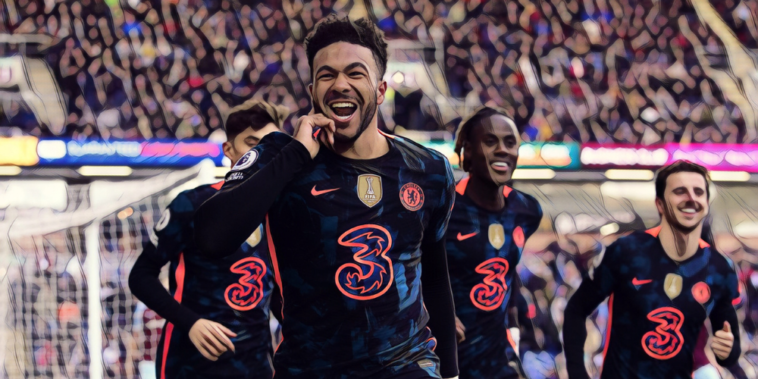 Chelsea’s failure to find a forward formula has been well documented this season, but the west Londoners have found various other avenues to goal during the current campaign.

Reece James continued his excellent season with another goal in the club’s 4-0 win at Burnley last weekend, with the right-back moving to five Premier League goals for the campaign.

James’ performance continued Chelsea’s happy habit of finding goals from unfamiliar sources and we’ve decided to look at the Premier League sides who have had the biggest contributions from defenders.

Here are the Premier League teams with the most goals scored by defenders so far this season.

West Ham have scored seven goals from defenders this season, remarkably a haul that has come from seven different players.

David Moyes’ side have developed a reputation as set-piece specialists in recent seasons, with only two Premier League sides – Liverpool and Manchester City – having scored more goals from set-pieces this season.

🎶 Ben Johnson, he's one of our own 🎶 pic.twitter.com/srKUe1hgCQ

Craig Dawson, Kurt Zouma, Issa Diop, Angelo Ogbonna, Aaron Cresswell, Ben Johnson and Arthur Masuaku have all scored one goal in the Premier League this season, an eclectic mix of defensive goalscorers that has helped propel the Hammers’ push for European football.

Aston Villa are also on seven goals scored by defenders this season, with Matty Cash and Ezri Konsa leading the way with two goals apiece.

Tyrone Mings, Matt Target and Kortney Hause have all also found the net, providing a welcome contribution for Steven Gerrard’s side.

Villa are beginning to find their feet under the new manager and impressive back-to-back wins over Brighton and Southampton have pushed the club into contention for a top 10 finish this season.

Liverpool have scored more goals from set-pieces than any other side in the Premier League this season, netting 15 goals from dead-ball situations in 2021/22.

Virgil van Dijk is often the target for set-pieces and the Dutch defender has scored three league goals this season, with no centre-back in the division having managed more goals during the current campaign.

Just Joel completing one of his mazy runs 😍

Trent Alexander-Arnold also has two goals to go alongside his league-leading 11 assists, whilst both Joel Matip and Andy Robertson have found the net this season to provide the Reds with a healthy attacking contribution from their backline.

Brentford remain clear of the Premier League’s relegation places after a solid first season at this level, having earned promotion to the top tier for the first time since 1947 last season.

The Bees have struggled for regular goalscorers this season, with only Ivan Toney (9) having managed more than three Premier League goals.

Eight of Brentford’s 30 goals scored have come from defenders this season, the club’s 10 goals scored from set-pieces a figure which ranks behind only Liverpool and Manchester City.

Thomas Frank’s side have shown the value in practising from set-pieces with a third of their entire goal haul coming from such situations.

Manchester City have also had eight goals scored by defenders in the Premier League season, with Aymeric Laporte leading the way with three goals – a joint-leading figure among centre-backs in 2021/22 (also Van Dijk, Thiago Silva, Jan Bednarek and Ben Mee).

Much was made about the lack of a recognised centre-forward among Pep Guardiola’s options this season, but City have shown that the club possess multiple avenues to goal and the league leaders have had 16 different goalscorers in the Premier League this season.

Five of those have been defenders, with Ruben Dias (2), Nathan Ake, John Stones and Joao Cancelo all also finding the scoresheet for the champions.

Chelsea lead the rankings and by some distance having had a staggering 16 goals scored by defenders during the 2021/22 campaign.

That figure equates for 30.19% of the goals the west Londoners have scored in the Premier League, with Reece James the highest-scoring defender in the division on five goals for the campaign.

That player is Reece James. 😤 pic.twitter.com/ZRegCsOt25

James’ five goals make him Chelsea’s third-highest scorer in the Premier League this season, a tally which leaves him level with £97.5m record signing Romelu Lukaku and ahead of Kai Havertz.