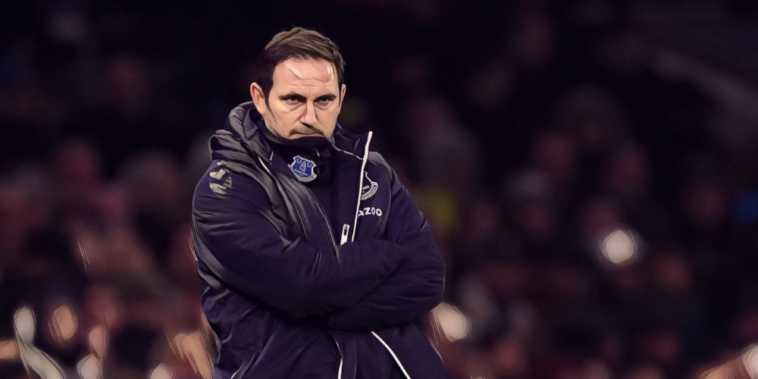 Frank Lampard has refused to set a points target for his struggling Everton side and has dismissed talk of a crisis at the club.

Everton are just a point above the Premier League’s relegation places after a torrid run of form, with the Toffees having lost seven of their last eight league fixtures.

Lampard’s side were thrashed 5-0 at Tottenham on Monday evening and have failed to register a single shot on target in their last two Premier League games.

The 43-year-old insists the task at Everton is not ‘bigger’ than what he had anticipated upon taking the job and is refusing to set a points target for survival, instead choosing to focus only on the next fixture with Wolves this weekend.

“It’s not bigger than what I thought. When you come into a team with the form we’re in, it’s clear to see. From the beginning it’s about getting security and Premier League survival,” he told his pre-match press conference.

“I don’t think you can [set a points target], that’ll be relative to what everyone else does. We have a lot of games, a lot of points to play for. We shouldn’t get too caught up in the end picture. Our focus can only be on the next one.”

Everton’s home form has been impressive since Lampard’s arrival as manager in January, winning three of their four games at Goodison Park in all competitions.

🗣 "It was my sons first birthday yesterday. But watched the games of course, there is a balance to it."

Frank Lampard admits he has an eye on the teams around Everton in the relegation spots pic.twitter.com/lbPCrOCAMm

Their sole defeat was a narrow loss to league leaders Manchester City and Lampard says a strong record on home soil is important to their survival hopes.

“It’s important, it’s been a big pleasure of the job so far for me,” he said of their home support. “We can’t rely on it, but it will be there. Beyond that, on a footballing level, we have to think about Wolves and give them the due respect they deserve. I don’t need to rally-cry the fans.”

Lampard admitted his side were ‘not good enough’ during their humiliation at Spurs last time out and has called on his side to correct their performance ahead of this weekend’s meeting with Wolves.

“You can analyse Monday night, and it’s our job to, to the nth degree,” he said.

“You have to be very candid with the players, and they should want that. We have to do our professional job and look at what went wrong in the game. We have to correct it very quickly, that was something to watch but not comfortable viewing.”

Lampard talked down talk of crisis meetings at the club this week and says he was well aware of the challenge he faced when taking charge at Everton.

“That’s just language, a lovely headline. It’s not a crisis, it’s very normal. I had some bad personal ones [as a player], team ones. Is this job tougher? I didn’t think I was going to come here and win 15 games on the bounce.”