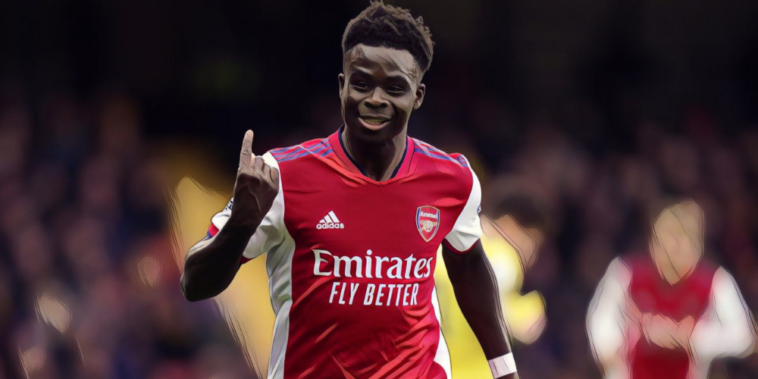 The weekend’s fixtures include huge clashes at both ends of the table, with Manchester United taking on Tottenham in a clash that could shape the race for Champions League football.

Crystal Palace will be hoping to secure a shock league double over Manchester City at Selhurst Park, whilst down at the bottom there are six-pointers as Leeds meet Norwich and Brentford take on Burnley.

Ahead of the weekend’s Premier League football, we pick out eight of the division’s major talking points.

Liverpool are the form team in the Premier League after racking up seven consecutive league wins to close the gap on Manchester City at the top.

The Reds have conceded just two goals during that run after grinding out a 1-0 win over West Ham last weekend, with Jurgen Klopp’s team on a run of momentum at present.

Resolute from the Reds to keep that clean sheet 👊 pic.twitter.com/Y59iXqgeBA

Liverpool’s 15-game unbeaten run in all competitions was ended by Inter Milan on Tuesday night, though it was not a result to derail their Champions League campaign as the club moved into the last eight.

After clawing back the domestic deficit on City in recent weeks, Liverpool now face a defining run of games with away clashes at Brighton, Arsenal and City in their next three.

Saturday’s lunchtime trip to Brighton comes after midweek excursions and Klopp will be keen to avoid a slip-up as Liverpool look to increase the pressure on the leaders. The Seagulls are on a run of four straight defeats, but fought back from two goals down to draw at Anfield in October.

Reality hits for Marsch and Leeds

The reality of the situation at Leeds will have struck Jesse Marsch as a disgruntled home crowd watched another Premier League defeat in midweek, the 3-0 loss to Aston Villa dragging the club closer towards the relegation places.

It’s now six straight Premier League defeats for Leeds who are just two points from the bottom three, with Burnley and Everton both possessing games in hand.

Marsch was pleased with the performance despite defeat in a narrow loss to Leicester last weekend, but the convincing manner of Aston Villa’s win at Elland Road will have raised concern.

🎙 𝗝𝗲𝘀𝘀𝗲 𝗠𝗮𝗿𝘀𝗰𝗵: "We're still digging hard. I'm not afraid of it and I will do everything I can to help these guys" pic.twitter.com/HoZSCwYlM2

Leeds face Norwich this weekend and Patrick Bamford’s return will aid their fight to survive, even if Marsch was keen to play down talk of a must-win this weekend.

Even if the American chose to talk down the clash with the Canaries publicly, he will know this is a game Leeds must take maximum points from.

No room for error in top-four showdown at Old Trafford

Manchester United and Tottenham meet this weekend in a game neither can afford to lose, the inconsistencies of both sides having allowed Arsenal to gain an advantage in the top four race.

United were abject in their derby defeat at Manchester City last weekend and will need a response as rumours of unrest inside the squad only continue to increase.

Meanwhile, Spurs continue to mix the sublime with the ridiculous, but will arrive at Old Trafford in confident mood after thrashing Everton 5-0 last time out, with Harry Kane having now scored nine goals in his past 12 league appearances for the north Londoners.

Dejan Kulusevski has also impressed during his first appearances for Spurs and the visitors have the quality to cause huge problems for a Red Devils’ defence cut apart at the Etihad last weekend.

Wolves at the door for Everton?

Frank Lampard’s arrival has failed to galvanise Everton with the Toffees on a run of three straight defeats without scoring, their 5-0 loss at Tottenham on Monday making the threat of relegation ever greater.

Defeat at the Spurs left Everton with just 22 points from their first 25 games of the season. It’s their lowest ever return at this stage of a top flight season and leaves the club one point outside the bottom three.

Individual errors, a lack of effort, and drained confidence were all apparent at Spurs and Lampard needs a response as the Merseysiders prepare to take on Wolves at Goodison Park this weekend.

Given there also remains a threat – though one deemed unlikely – of a points deduction for breaching financial rules, Lampard knows his side desperately need points on the board and quickly if Everton are to avoid an ignominious relegation.

The statistics are damning with Everton having failed to register a shot on target in successive games and with fixtures against five of the current top six still to come, it looks set to be a survival bid that goes down to the wire.

The events at Chelsea this week have placed the west Londoners into a state of crisis heading into this weekend’s fixtures, with the sanctions placed on owner Roman Abramovich set to have huge consequences.

Thomas Tuchel’s side won at Norwich on Thursday despite the distraction of the club’s situation and will be hoping to focus on football again as Newcastle visit Stamford Bridge this weekend.

Newcastle are riding a wave of momentum after winning six of their past seven league fixtures, a nine-game unbeaten run leading Eddie Howe’s side 10 points clear of the Premier League’s relegation places.

That run is set to pave the way for Newcastle’s new regime to spend big in the summer, an ownership that has more than its own alleged connections to war and other atrocious crimes.

Aston Villa have hit a fine run of form in recent weeks, winning each of their past three games at a combined aggregate score of 9-0.

Philippe Coutinho’s renaissance has captured the headlines and the Brazilian was again excellent in the 3-0 win at Leeds on Thursday, but another star becoming increasingly influential is right-back Matty Cash.

Cash provided eight goal involvements during his final season at Nottingham Forest, but was unable to replicate that return after stepping up to the Premier League last season and managed no goals and two assists for Villa in 2020/21.

The 24-year-old’s end product appears to be improving, however, and it’s now three goals and two assists in his last six appearances for Villa after scoring one and creating another at Leeds.

The Premier League’s best sides all have valuable contributions from full-back and Cash’s improvement in the final third can add another option to the forward threat of Steven Gerrard’s side.

Arsenal’s young guns are in pole position to end their exile from Europe’s elite, a four-game winning run having lifted the Gunners into the Champions League places.

Mikel Areta’s faith in youth has been vindicated so far this season and none have impressed more than Bukayo Saka, whose goal and assist against Watford last weekend continued his exceptional season.

The 20-year-old now has 13 goal involvements in the Premier League this season, a league-leading total among players aged 21 or under. Saka’s speed, guile and improving end product have propelled Arsenal’s challenge for the Champions League in the absence of a recognised goalscorer at the Emirates this season.

Prospective centre-forward targets will no doubt be watching the north London side’s progress closely, with the likes of Saka, Emile Smith Rowe and Martin Odegaard a fine creative cast.

The former will be the man Leicester will need to contain this weekend, as an injury-hit Foxes look to halt Arsenal’s momentum.

Guardiola will be wary of Palace threat

Crystal Palace’s 2-0 win at Manchester City in October was one of the shocks of the season, as Patrick Vieira’s side upset the champions with a performance of hard-running and clinical counter-attack.

The Eagles will be hoping to complete a league double over the leaders at Selhurst Park on Monday, an evening fixture that has all the hallmarks of a potential banana skin for Pep Guardiola’s side and their title challenge.

Patrick Vieira looks ahead to Monday night against Man City 💬

Palace have proven difficult to beat in recent weeks and have lost just one of their last six – a late defeat to Chelsea – and will head into the clash in confident mood after an impressive win at Wolves last time out.

Guardiola – whose side again play after Liverpool in this weekend’s fixture list and could see their lead reduced to three points – will be well aware of the threat Palace can pose.