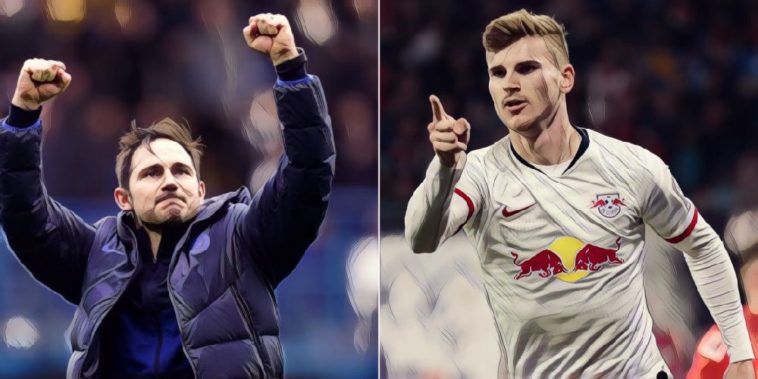 Frank Lampard has discussed Chelsea’s capture of Timo Werner and admits he is ‘excited’ at the prospect of working alongside the forward next season.

Chelsea continued their impressive summer recruitment with the signing of the Germany international from RB Leipzig, the forward having enjoyed a prolific season for the Bundesliga side with 32 goals in all competitions so far this season.

Werner will finish the domestic season with Leipzig before making the move to the Premier League, and Lampard has expressed his delight at sealing a deal for one of Europe’s most exciting young forwards.

“I think he is clearly a player we liked,” Lampard said at his pre-match press conference. “As a club we went for him, he has huge talent. We were clear we wanted to improve and he will do that, I’m excited to have him.

“I had good conversations with him personally. It seemed like an exciting project for him. We were pleased he came to us.”

“I spoke to him and he is excited. He is looking to finish his season first, but he is the type of player we are looking at. The talent he has and work ethic is what shone through.”

Werner’s arrival has raised speculation surrounding the future of Tammy Abraham, the academy graduate having scored 15 goals in all competitions this season since being handed an opportunity by Lampard.

The Chelsea boss says he has spoken to the club’s current number nine about the importance of competition, and admits he is pleased with the range of options at his disposal ahead of the new campaign.

“I have spoken to Tammy before about competition. I don’t have to address every player if another one comes in. It’s how it has been in the Abramovich era, but Tammy has been very good this season. We have had options and pleased with the idea of that.”