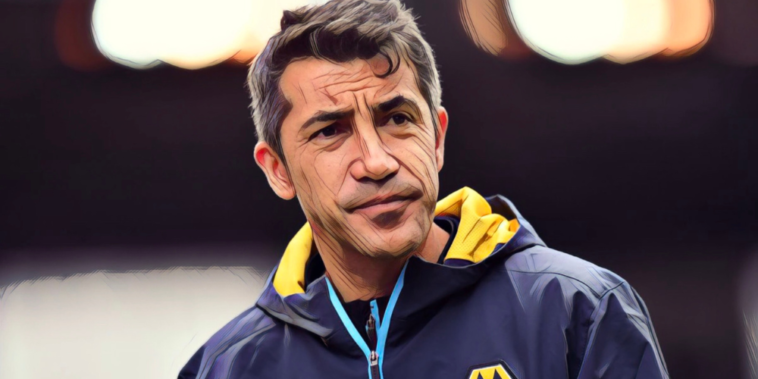 Bruno Lage has opened up on Diego Costa’s arrival at Wolves ahead of this weekend’s clash with Manchester City.

Wolves take on the Premier League champions on Saturday lunchtime, looking to build on their first win of the new season against Southampton last time out.

Lage’s side are short of options at centre-forward, after summer signing Sasa Kalajdzic suffered an ACL injury on debut against the Saints. Raul Jimenez also missed the clash and Lage confirmed the Mexican will not feature this weekend.

“Raul is still not available and is still not working with the team,” Lage said at his press conference. “After the time he was in recovery he needed to play three games in a row. He was a little bit tired.

“Now he needs time to recover. After he is doing some treatment but in the moment he is not training and is not available tomorrow.

Wolves have strengthened their attacking options with the free transfer arrival of Diego Costa, who has been a free agent since leaving Atlético Mineiro in January. The 33-year-old will provide an experienced option at centre-forward and returns to the Premier League five years after leaving Chelsea.

“We are very happy with him,” Lage said. “We know he needs time not to be fit because he is fit, but to be ready to compete at this level. It is his destiny [to return to Premier League]. 15 months ago when I think about him we didn’t have any chance [of signing him], now he said to me what happened is because it is meant to be.

“We need a reference in the box, we need one guy to compete with Raul and Diego has that profile and he has a different profile to Raul.”

Lage was asked whether Wolves had been ‘too nice’ this season after one win in six and believes Costa’s notoriously competitive streak will add a new dimension to his side.

“That’s a good point. If you want to press and be more aggressive sometimes you cannot be too nice. You need to be aggressive in the duels and he [Costa] said that to me. ‘I know you ask about my profile, my personality, I am one of the best guys outside the pitch but inside the pitch I am very hard’. That is the kind of man I want also. It was a simple talk and it was very easy to convince him to join us.”

Lage refused to confirm whether Costa would be involved against City but hinted that the Spaniard might have a role to play.

“Let’s see. We have one more day. Let’s see if he can be available.”