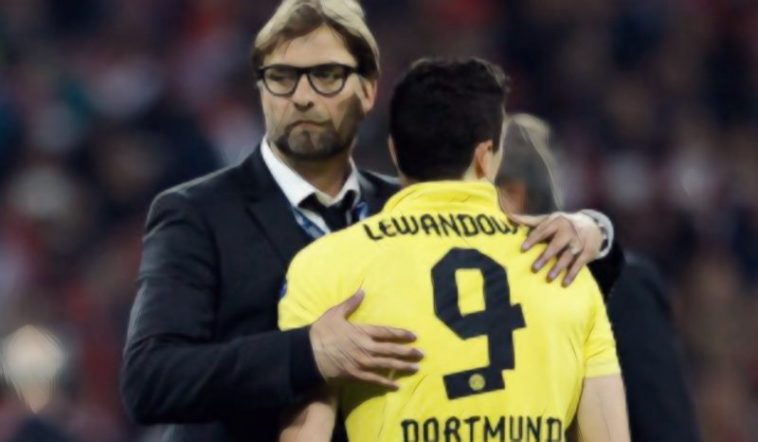 It’s not often Pep Guardiola describes a team as “fantastic, phenomenal, overwhelming”, and claims he and his team “have to learn from that”.

Jürgen Klopp has turned his Liverpool team into the most feared side in Europe for the first time since the 1980s, despite being outspent by his English and European rivals.

Although few could have predicted the phenomenal success he would have in England, he showed us a blueprint of the scintillating football he would soon have his team playing in Germany earlier in the decade.

Dortmund overtook the mighty Bayern in the Bundesliga during the period where the Bavarian giants reached three Champions League finals in four seasons and were making a strong case to be the best side in Europe.

Borussia Dortmund’s team in the early stage of the decade also had a significant influence on the German team that would become world champions in 2014.

The 2012/13 season gave Europe a glimpse of the football Dortmund were playing regularly in Germany, so why didn’t we see more of it?

Just like at Liverpool, Klopp took over a squad in dismay at Borussia Dortmund, that had just achieved their worst league position in 20 years, finishing 13th of the 18 teams in the Bundesliga. The club was also struggling financially.

The German began to implement his ‘heavy metal’ brand of football, and drastically improved the team’s performance, finishing sixth in his first season in 2008/09 and fifth in 2009/10.

The team was continuing to adapt to their new, demanding style and key signings like Neven Subotic, Lars Bender, and Mats Hummels were made.

The dramatic rise of Westphalia outfit began in the 2010/11 season, where the signings of Robert Lewandowski and Shinji Kagawa and the promotion of Mario Götze to the first team brought them to a new level.

The team’s style was focused around “Gegenpressing”. The side used the counter-press (pressing the opposition when they have just regained possession and are not as likely to be able to keep the ball), demonstrating their manager’s intensity during these moments.

If you feel like you regularly hear managers talking about “transitions” now and don’t know how this started, Klopp’s Dortmund is your answer. His side’s effectiveness in transitions ignited a trend in Germany, and eventually football.

The side tended to line up in a 4-2-3-1 formation, with club legend Roman Weidenfeller in goal, protected by Mats Hummels and Neven Subotic. Marcel Schmelzer and Lukas Piszczek surrounded them, serving as engines who were constantly moving from defense to attack at a high pace.

Sven Bender served as a holding midfielder protecting the back four, while Nuri Şahin played beside him as a deep-lying playmaker. Shinji Kagawa and Jakub Błaszczykowski were quick wingers who could drift inside or drive down the wing depending on their opposition, with the technically gifted Mario Götze drifting between them in the middle. Lucas Barrios (eventually Robert Lewandowski) played as a versatile number nine.

This side bounced back from opening day defeat at home to Leverkusen to collect 43 of the next 45 available points. They won the league comfortably, with dominant victories at home and away to Bayern, but underperformed in Europe, leaving the Europa League in the group stage.

That summer, Nuri Şahin left for Real Madrid after a stellar season, to be replaced by Ílkay Gündoğan. Robert Lewandowski took over from Lucas Barrios to become the team’s main striker. With these signings and another year of adjustment to Klopp’s ‘heavy metal’ football, Dortmund reached even higher performance levels.

The beginning of the season was disappointing, as BVB lost three of their first six league games, but once they clicked, they never looked back, remaining unbeaten for the remainder of the domestic season.

Dortmund’s thrilling football brought the club its first-ever German double, as Dortmund set a league record for points in the Bundesliga (81), and beat Bayern Munich for their fifth Der Klassiker victory in a row to win the DFB Pokal, in an end to end 5-2 victory. The club also set the record for the longest unbeaten streak in the Bundesliga (28 games).

Just as had happened in the previous season, the phenomenal football Dortmund played at home was not replicated in Europe. Klopp’s side was faced with the task of progressing past a very beatable Arsenal side, Marseille and Olympiacos. They were heavy favourites to do so.

Klopp’s men were a shadow of themselves in Europe again, as they snatched a last-minute equaliser to draw with Arsenal in the first matchday, before losing four of their next five games, which is more than they lost in all other competitions that season. This Mathieu Valbuena goal sealed their fate as fourth place in their group.

That’s Mathieu Valbuena’s first goal in the Champions League proper since the unbelievable late winning goal against Dortmund that sealed OM’s progression to the last 16 in 2011 pic.twitter.com/Xivgu0dCrf

Despite the exhilarating football Dortmund was playing in Germany, they could not translate their form into European success, having failed to progress past the group stage of European competitions in both of their dominant league winning seasons. Their 2012/13 season had become about recovering European pride.

Marco Reus was signed from Borrusia Mönchengladbach to replace Shinji Kagawa who had departed for Old Trafford, and Nuri Şahin returned to the club on loan during the winter.

Klopp’s side’s performances dropped domestically, as a rampant Bayern Munich side, who had endured finishing second in each respective competition last season, were out for blood. Bayern smashed Dortmund’s recently set points total record, winning the league with 91 points.

BVB was drawn into the ‘group of death’ in the Champions League, tasked with facing Real Madrid, Manchester City, and Ajax. Rather than be intimidated, the German champions saw this as an opportunity to state their intent in Europe, and finally show the best sides in Europe what they were about.

Dortmund 2012. An incredible side in both transitions.

Here they are at their very best. Simple but effective. pic.twitter.com/o7uKayOcoq

Dortmund went unbeaten in the group, with standout performances at the Bernabeu and The Etihad resulting in them being unfortunate to not win every game.

Klopp’s side comfortably dispatched Shakhtar Donetsk, winning 5-2 on aggregate, before facing Malaga in the quarter-finals. A dominant performance in a 0-0 at La Rosadela meant they were overwhelming favourites to progress to the semi-finals. The second leg was one of the great Champions League ties.

In an end to end game, Malaga scored an 81st-minute goal to bag a crucial second away goal, making defeat seem impossible being 2-1 up going into stoppage time. Marco Reus pulled one back in the 91st minute before this happened.

Dortmund had the momentum in Europe and a focus on European glory knowing that their Bavarian rivals were about to claim the domestic league and cup. They faced familiar opposition in José Mourinho’s Real Madrid. A goalscoring masterclass from Robert Lewandowski ensued.

And on this day in 2013, Robert Lewandowski went ballistic against Real Madrid, scoring 4⃣ goals for Borussia Dortmund in a Champions League semi-final first leg 😳pic.twitter.com/1umYwvtbiL

Klopp’s side had once again blown the best Europe had to offer away, drubbing Madrid 4-1 at the Westfalenstadion. Despite a late fightback at the Bernabeu in the second leg, Borussia Dortmund was headed to Wembley for their first Champions League final since 1997.

Although Dortmund’s thrilling ‘heavy metal’ football had finally translated into Europe, they were facing a well-oiled machine in the final. Bayern had strolled past them in the Bundesliga and DFB Pokal and was yet to lose to their rivals that season. They had just beaten Barcelona 7-0 on aggregate, after previously thumping Juventus 4-0 on over two legs.

Klopp’s side was psychologically crippled heading into the final by the news that Mario Götze, who was injured, was to join Bayern after the final. Speculation was also growing that Robert Lewandowski would soon follow suit. Despite a phenomenal European campaign, they were underdogs.

In a tight contest where neither side played their best football, the game was poised at 1-1 and looked to be heading to extra time, before Arjen Robben made history for Bayern with this effort.

With this victory, Bayern broke Dortmund on the pitch. They continued their strategy to dominate German football by breaking them off the pitch, signing their key players in Götze, Lewandowski, and Hummels in seasons to come.

Dortmund had peaked at this stage. Continuing to compete in Europe, they made it to the quarter-finals in 2014, where they were just short of the quality to repeat their heroics against Real Madrid, losing 3-2 on aggregate to the eventual champions.

Klopp’s side burned out in the 2014/15 season, losing 5-1 on aggregate to Juventus and finishing seventh in the Bundesliga, leading the German to resign from his post at the end of the season.

Bayern managed to halt Dortmund’s rising side to continue their domestic dominance and remain as the only German team competing in Europe. They have won each Bundesliga since 2013, as no team has been able to bring such ‘heavy metal’ football to the fore since.