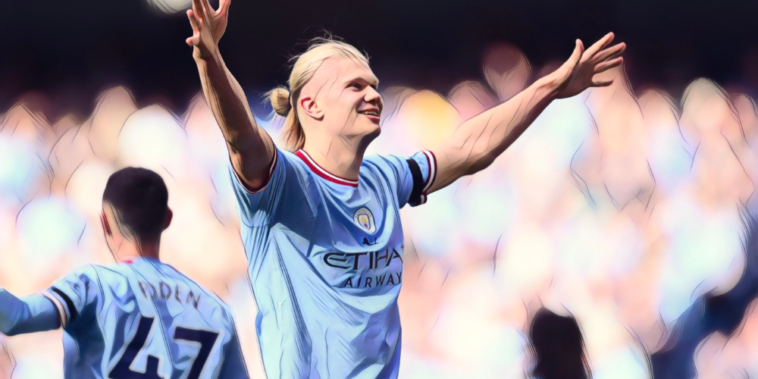 Jurgen Klopp says Erling Haaland has been ‘a perfect fit’ at Manchester City as he prepares Liverpool to face the Premier League’s leading scorer.

Haaland has made an incredible impact since arriving at Manchester City from Borussia Dortmund during the summer, with the forward having scored 20 goals in just 13 appearances across all competitions.

The Norwegian has 15 goals in the league alone, seven more than the second-highest goalscorer in the Premier League this season, Harry Kane.

Klopp faced Haaland for the first time during the forward’s breakthrough season at Red Bull Salzburg in 2019/20, with the then-teenager netting during the Austrian side’s 4-3 loss at Anfield.

The German admits that Haaland’s potential was ‘insane’ at that point and believes the forward has proven a perfect fit at the Etihad, as he thrives off the service of ‘some of the best players in the world at setting up goals’.

“When he was very young, you could see the potential, it was insane,” Klopp told his pre-match press conference.

“I don’t think he started against us in a home game, I think he was injured or came on – but we were already pretty busy with thinking about him, I can remember that.

“How can you close him down, shut him down – he scored anyway!

“Physically he sets new standards, the combination of being really physical and technical and sensational awareness, his orientation on the pitch is exceptional, he knows always where the decisive gaps are, barely offside.

“Now at City he has some of the best players in the world at setting up goals – De Bruyne, Mahrez, Foden, Bernardo Silva, – so it’s a perfect fit.”

Klopp believes Haaland is currently ‘the best striker in the world’, but warned his side of the dangers of concentrating only on City’s number nine.

“Obviously when you play against somebody at the moment who is the best striker in the world you have to make sure he doesn’t get that many balls.

“That’s what we will try but obviously against City the problem is if you close Haaland down with too many players you open up gaps for all the other world-class players.

“So that will not make life easier, it’s a challenge, it’s a football problem and we will try to find a solution.”