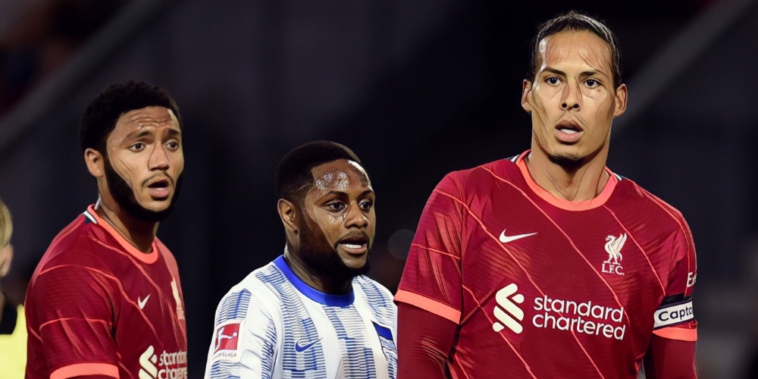 Jurgen Klopp has reacted as Virgil van Dijk and Joe Gomez made their long-awaited Liverpool returns in the club’s 4-3 pre-season friendly defeat to Hertha Berlin.

Van Dijk and Gomez both made substitute appearances during the friendly fixture with the Bundesliga side in Austria, with the former having been out for nine months after sustaining an anterior cruciate ligament injury against Everton in October 2020.

Gomez was also ruled out for the remainder of the 2020/21 season the following month after suffering his own knee injury in England training and Liverpool boss Klopp admits it was a ‘nice feeling’ to see the defensive duo return following long periods on the sidelines.

“It was a nice feeling,” he told the club media. “Started immediately well and usually we all know that the fourth goal is a clear situation which saw and defend well. But that’s it.

“I’m not sure, 260-something days for Virg and not much less for Joe they didn’t play football, so it’s nice to have them back. It was the first step, really important.

285 days ago, I started on a journey back towards playing. It’s hard to express how I am feeling, but it’s important to me that I say I feel blessed to have had the support of so many incredible people. The surgeon, my physios, coaches and staff who have been with me in my 1/2 pic.twitter.com/jdWKUHykDI

corner since day one. My teammates for giving me energy and keeping my head up. The fans for their love, support and encouragement. And most of all, my family because without them, I’d be nothing. Thank you. The work doesn’t stop now. It’s only just starting. We keep going! 2/2 pic.twitter.com/OiNLMLO44q

“Nearly all [the players] are back, then during Evian they will pretty much all be back I think. That’s good and then we can really start preparing, involve them all, get used to each other again and all this kind of stuff.

“Then we have a tricky start away at Norwich, that’s how it is. They obviously were flying last year, they’re probably still flying, so we have to be ready to fight – and I saw glimpses of a fight tonight. I saw the boys want and all this kind of stuff, there’s no doubt.

“All the things I said before the game – that we are in full training all the time. No doubt there was a lot of good things as well but, of course, conceding four is not an option – but for tonight we have to take it.”