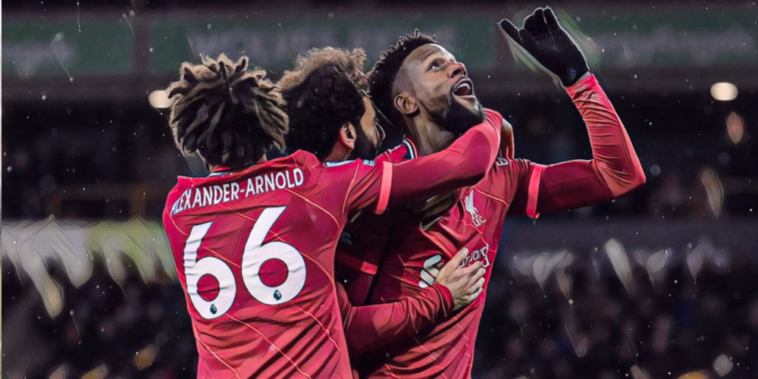 Liverpool moved to the top of the Premier League as Divock Origi’s 94th-minute strike snatched all three points against Wolverhampton Wanderers at Molineux.

Chelsea’s rare slip up away at fourth-placed West Ham United early on Saturday had opened the door for the Reds to move above their title rivals at the summit with victory, although they were faced with a resilient Wolves side who looked determined to end their nine-game losing run in this fixture in the league.

In what was an even first-half, the best chances unsurprisingly fell to the visitors, with Diogo Jota somehow heading wide at the back post against his former club, before the in-form Mohamed Salah squandered a guilt-edged chance after an excellent pull back from Andy Robertson.

Jota again inexplicably failed to score midway through the second-half after initially doing well to pick the pocket of the stranded Jose Sa, although the forward could only fire his effort straight at former Liverpool man Conor Coady who blocked the effort on the line.

It looked as if that miss, in particular, would prove costly heading into the closing stages, as Sa then reacted well to thwart Sadio Mane’s close-range effort, with Jurgen Klopp’s side looking like failing to score for the first time this season.

Almost inevitably, however, with the game into the fourth minute of stoppage time, up stepped substitute Origi to score yet another vital goal for the club, the Belgian forward lashing home on the turn after some classy build-up play from Salah, who registered his 150th Premier League goal contribution.

13 – Liverpool have scored 13 game-winning goals in the 90th minute or later in the Premier League under Jürgen Klopp, four more than any other side in the competition since the German arrived. Klutch. pic.twitter.com/rae5sQnVnw

That dramatic victory puts Liverpool atop the pile, although Manchester City have the chance to move ahead with a victory at Watford, while Wolves have now failed to score in four of their last five league games.

Speaking after the win on what was a windy afternoon in the West Midlands, Klopp was unsurprisingly delighted to have secured the victory against Bruno Lage’s defensive-minded side, praising his side’s concentration after they had missed ‘massive chances’ earlier on in the match.

“Absolutely great. A very difficult game, we had to fight against an opponent that changed their approach,” he told Match of the Day. “They normally are a footballing side we didn’t see much of that today.

“They defended deep with a lot of players and go for counter attacks and it’s really difficult as there’s no-one as quick as [Adama] Traore.

“It was a massive challenge for our concentration as we missed massive chances with Diogo [Jota] but you have to stay in the game, which is what we did. We brought on [Alex] Oxlade-[Chamberlain] and Divock [Origi] on and in the end it worked out and I’m really happy with that.

“The football game was really good in tricky circumstances. We played a lot of good stuff, it wasn’t easy and when the game is 0-0 you feel the pressure when you want this result so badly. The fact that we got it makes it really good.

“I heard this [the weather] happens in Stoke, but it was in Wolverhampton and we came through and it was all good.”

Liverpool – who have already qualified for the Champions League knockout stages – take on AC Milan in the competition on Tuesday night, before they host Aston Villa next Saturday.