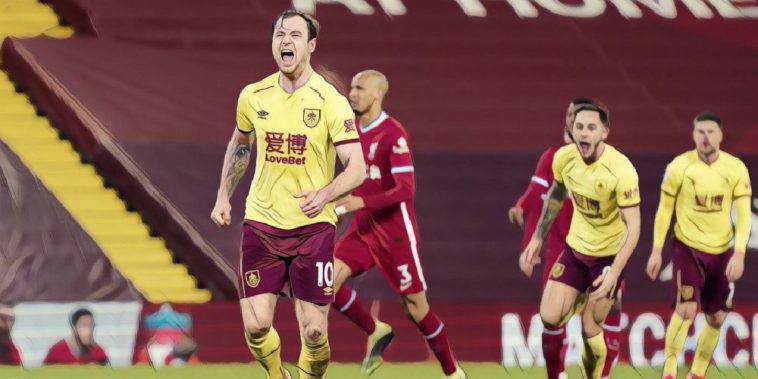 Liverpool’s incredible 68 game unbeaten run crashing to a halt as Burnley battled to a 1-0 win at Anfield.

Liverpool came into the game in uncharacteristically poor form, without a win in their last four games, and goalless in their last three to see them slip from top spot in what looks set to be an incredibly competitive title race.

The Reds were dominant throughout the first period but rarely threatened Nick Pope in the Clarets goal, with the hosts generally restricted to long-range shots, while only two of their 20 first half crosses found a teammate.

Burnley offered a threat on the counter-attack through forwards Chris Wood and Ashley Barnes, though it was Liverpool who were presented with the gilt-edged opportunity of the game to take the lead minutes before the interval. Ben Mee totally messed up an attempted back pass to leave Divock Origi racing through on goal, only for the Belgian to totally lose his composure and smash his effort against the bar.

Klopp called on Firmino and Salah from the bench early in the second half and within minutes of the Egyptian’s introduction, he forced Pope into a fine reaction save.

However, the reigning Champions ultimately looked bereft of creative ideas, and with just seven minutes left to play, Ashley Barnes won and converted a penalty, the 31-year-old having been upended by Alisson.

A night to forget. pic.twitter.com/fCgDOy8PEw

The result brings an end to Liverpool’s incredible unbeaten home record of 68 games which had stretched back until April 2017, and speaking afterwards, Jurgen Klopp took responsibility for the defeat but admitted his side’s decision making needs to be worked on.

“We lost the game which is pretty impossible but we did it,”  he told Sky Sports. “That is my fault. It is my job to make sure the boys have the right feelings and confidence. That didn’t work out.

“We had the ball a lot and created some situations that are OK but our final decision is not right. I said the same thing last week. When something doesn’t work you must try harder, longer and more often and make better decisions. It didn’t work tonight.

“It is always my fault. If I make clear which movement s make sense because it will hurt the opponent and we don’t do that then I need to make it clearer. It is not that they don’t want. It is difficult to play against these low blocks. It helps if you score the first goal but we didn’t. That changes the opponent. After not scoring for a long time not everybody feels confident.

“I never thought of us as free-scoring. I knew we had to work hard. It is not the first time or last time it will happen in football. We can only use this game for the next one. It is not because the players do not have the ability.

4 – This is the first time a Jürgen Klopp side has gone four league games without scoring since his Mainz side did so in the Bundesliga, between November and December 2006. Throwback. pic.twitter.com/0rvM29BG9D

“Our decision making is the problem. If we score in our big moments it changes things but we did not.”

Next up is an away trip to face Manchester United in the FA Cup fourth round, before travelling to north London to take on Jose Mourinho’s Tottenham, who are just one point behind them in the table with a game in hand.