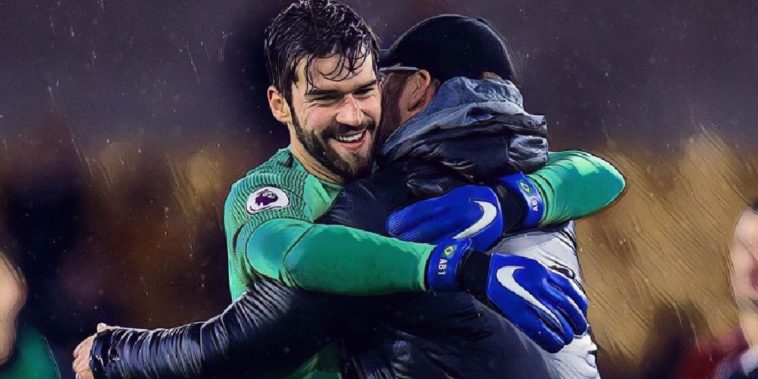 Liverpool boss Jurgen Klopp praised his sides resilience after they beat Watford 2-0 at Anfield today, to continue their relentless march towards a first league title in 30 years.

Jurgen Klopp’s side started brightly, but the visitors looked a lot more well drilled in defence under new boss Nigel Pearson, and the Liverpool struggled to create much in the way of clear cut chances.

Watford would grow into the game and Abdoulaye Doucoure had a great chance to score from 10 yards out, but scuffed his shot badly.

The Hornets would be made to pay almost straight away with Liverpool breaking forward and Mo Salah finishing brilliantly after being played through by Sadio Mane.

It turned out to be an open second period with Alisson making a couple of smart stops to stop Watford equalizing, and Liverpool had a Mane header ruled out by VAR.

Salah would seal the points in style late on, the Reds attacker finishing with an audacious flick from close range.

Despite playing fewer games than both, Mo Salah has scored more goals for Liverpool than Luis Suarez and Fernando Torres ⚽ pic.twitter.com/0Nh9myOLqi

Speaking after the game Klopp conceded the Reds had not been at their best, but the German was pleased to see his side get over the line ahead of a hectic festive fixture schedule.

“It’s true [that it was not the prettiest game] but I have no problem with that,” Klopp told BT Sport.

“The most important thing that we have to show in this period of the season is resilience and that’s what we showed again. The boys were ready for a big fight. It was a difficult preparation for that game, we analysed that [Watford] could have been like this or like that.

“Of course, we played on Tuesday [in the Champions League] a very exceptional and important game, and we have had much more games than the opponent so they had a completely new setup. Nigel [Pearson] did an incredible job in the short period they have had together.

“Watford had their chances but we had Alisson, we scored our goals and apart from that, we had to fight. We could have made the game easier for ourselves if we keep the ball smarter, pass it about a little but that’s how it is. The boys are not tired but it’s intense to be constantly in charge of the game.

“We have to defend some moments with passion instead of organisation, because sometimes that was not always perfect, but we did that, and when we didn’t, Ali was there, that’s why we have 11 players, not only 10 and one who wears gloves.”

Next up for Liverpool is two games in two days next week, with a youth team set to face Aston Villa in the Carabao Cup and the first-team travel to Qatar bidding to become Club World Cup Champions.