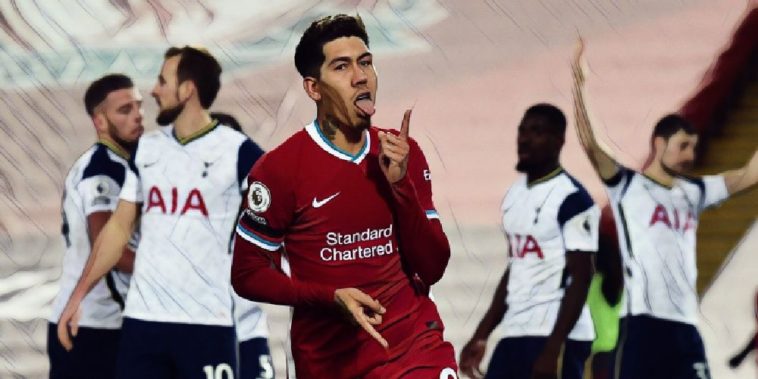 Jurgen Klopp hailed what he described as a ‘massively deserved’ win as Liverpool returned to the summit courtesy of a late Roberto Firmino header against title rivals Tottenham Hotspur at Anfield.

Having laboured to a 1-1 draw against Fulham at the weekend, Liverpool quickly came out of the traps against the early league leaders as they looked to seize an advantage in the title race, the champions showing little caution despite having come into the game without any fit senior centre backs.

Despite their makeshift looking backline, the Reds were unperturbed and looked to have shaken off their weekend disappointment as Mohamed Salah opened the scoring midway through the first-half, the Egyptian international seeing his deflected effort sail past a helpless Hugo Lloris.

Like many games this season, however, Spurs looked incredibly dangerous on the counter-attack and grabbed an equaliser just seven minutes later, with Heung-Min Son continuing his superb form to fire home following an excellent threaded pass from Giovani Lo Celso.

As the second-half progressed the hosts continued to dominate possession yet they couldn’t fashion an opening, while the visitors wasted two glorious opportunities, forward Steven Bergwijn seeing his curling effort strike the post before the usually reliable Harry Kane headed over from close range.

Those missed chances ultimately proved costly as Jurgen Klopp’s side grabbed a late winner, with Brazilian international Firmino firing home a bullet header from a corner to the delight of the 2,000 home supporters.

That win means Liverpool move three points clear at the top of the table and while Klopp had denied Spurs were simply a counter-attacking side before the game, he described Jose Mourinho’s side as a ‘monster’ on the break. The German did however insist that the victory was fully deserved after a controlled performance, while he also questioned the validity of Spurs’ equaliser after what was an incredibly tight offside decision.

“A good game against a counter-attacking monster, the possession we had we did incredibly well,” he told Amazon. “Yes, they have scored a goal, had two chances, apart from that we controlled the game and it is a massively deserved three points and I am happy.

“For me, it is offside [the Spurs goal]. They watch it 20 times, but when I saw it, it is offside. There is nobody to blame, the best way to defend Tottenham is to keep the ball all the time.

“It was just a really good game and I am so happy we scored that goal because it felt like 70% of the ball against a top side. Bobby (Firmino), what a header, I am over the moon for him. What a game he played, those movements, he opens up all the other gaps.”

The games come thick and fast as Liverpool are back in action against Crystal Palace on Saturday afternoon.

Keep your enemies closer: Five of the biggest feuds between teammates in football