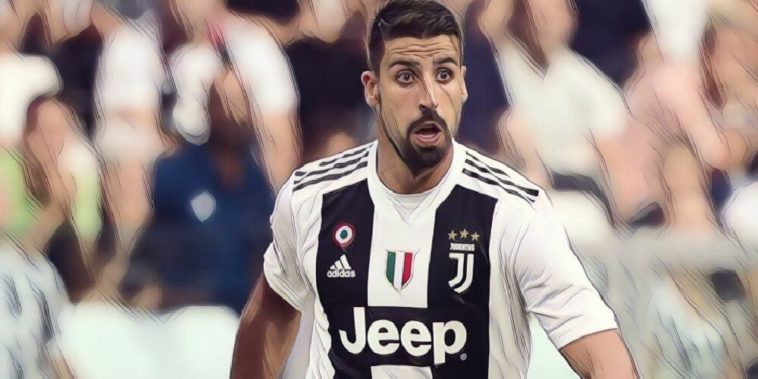 Sami Khedira has revealed he still harbours dreams of playing in the Premier League, naming Jose Mourinho and Carlo Ancelotti as managers he admires as he seemingly attempts to put himself in the shop window.

Khedira has fallen out-of-favour at Juventus and has failed to make a single appearance for the club so far this season, with the midfielder having been strongly linked with an exit ahead of the January transfer window.

The former Germany international – who won the World Cup in 2014 – has just seven months remaining on his contract at Juventus and has been informed he has no future with the Italian champions.

Khedira has now discussed his next move as he prepares to leave the Bianconeri and the 33-year-old has revealed his long-held ambition to play in the Premier League.

“When I was a child it was always a big dream of mine to be a Premier League player,” he told Sky Germany.

“I am really happy and satisfied with my career until now but one thing is still missing because I always had this dream and it has never come true… to be a part of the Premier League.

Juventus' Sami Khedira has not ruled out playing in the Premier League before he retires pic.twitter.com/tqh9gEq6SP

“I always enjoy playing in the Champions League against the English clubs. The atmosphere, the style and the idea of football has always impressed me.

“If it is possible, it will for sure be a really big dream [come true] and an honour to be a part of the Premier League.”

Khedira previously played under Tottenham manager Mourinho during his time at Real Madrid, forming part of the side which were crowned as Spanish champions in record-breaking style during the 2011/12 campaign.

The German has described Mourinho as a ‘champion’ and says he would not turn down the opportunity to work alongside the Spurs boss once more, though also name-checked Everton manager Ancelotti as a coach he greatly admires.

Speaking why he admires Mourinho, Khedira added: “Because of his personality. He is always direct, honest, clear in his mind and a great coach.

“Many people talk about him [being] too defensive but he is a winner, he is a champion. That is why he impressed me the most.

“I really enjoyed working with Jose Mourinho but there are many coaches who I would like to work with.

“I would never say no again to Jose Mourinho but it is not the only guy who I would say I would like to work with again.

“There are many coaches, even in the Premier League that I respect a lot.

“Ancelotti is doing a great job at the moment and is a great personality. He is one of the coaches who impressed me also.”