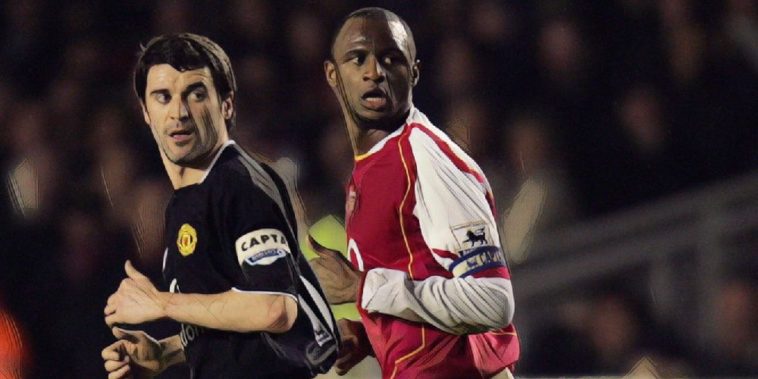 Darren Fletcher has opened up on the infamous tunnel row between Roy Keane and Patrick Vieira ahead of a fiery clash between Manchester United and Arsenal at Highbury.

The two sides enjoyed arguably the greatest rivalry of the Premier League era either side of the millennium, regularly competing for the league title and playing out a series of iconic clashes.

Central to the intensity of the rivalry were club captains Keane and Vieira, the two memorably contesting ferocious battles on the pitch and, on one unforgettable occasion, in the tunnel pre-match.

Ahead of a crucial clash between the great rivals at Highbury in 2005, Keane confronted Vieira in the tunnel after objecting to the attempts of the Gunners’ players to intimidate teammate Gary Neville.

The television cameras were perfectly placed to capture a defining moment in a Premier League rivalry for the ages, and former Manchester United midfielder Fletcher has offered his insight into the now legendary bust-up.

“There was clearly something in the air, because Arsenal started up in the tunnel after the warm-up!“ Fletcher told manutd.com.

“It sounded surreal because that doesn’t happen. It hadn’t happened before and hasn’t happened since. It was a unique situation.

“Gaz didn’t seem too bothered by it, he just let out that laugh that he does. But it was game time, so Roy did what he does.

“I think it was kept among the players. He didn’t broadcast what he was about to do. It was just said to a few of the lads; it wasn’t as though Alex Ferguson had sat us down and spoke about it. Roy took it upon himself. ‘I’m the captain. Nobody does that to my players.’

Will the Premier League ever see a rivalry as fierce as Patrick Vieira v Roy Keane #AFC pic.twitter.com/ObpwoKSM9s

“So we get into the tunnel…and it all kicks off.

“When you look back at the footage, it doesn’t look like Roy’s in control. He is.

“You saw the Arsenal players almost telling Vieira to leave it, not to get involved, whereas we didn’t need to do that with Roy. We knew Roy. We knew he’d be on it. We were backing Roy, but letting him do his thing. He’s our captain, our leader, he would always do what was in the best interests of the team. It wasn’t Roy going in on his own, trying to make himself look good, it was just Roy defending his team-mate. That brings out the best in him. We were ready to back him no matter what, and none of us would ever have held him back. No chance. We knew he would be cool, calm, collected. So in that moment, you’re not sure which way it’s going to go, but you know you’re on the right side, however things pan out.

“When that moment passes and you’re getting ready to go out onto the pitch, you’re thinking: ‘We’re not losing this now. No way.’

“In the pre-match lineup, both teams shake hands. Gary gives Vieira’s hand a big squeeze. Brilliant. It’s that old one: the cameras are on, they can see everything and we’re not in the tunnel now. Plus he’s got Roy Keane as his captain, hasn’t he? Suddenly he’s ten men!

“I didn’t do anything specific like that. I just shook everybody’s hand. I had my job to do for the rest of the game against Vieira, so I was pretty much in the zone. I always looked people in the eye and shook their hand. For me, it didn’t matter who I was up against. Nobody held any fear because nobody was better than the players I was facing every day in training. That’s the thing I always took confidence from.”