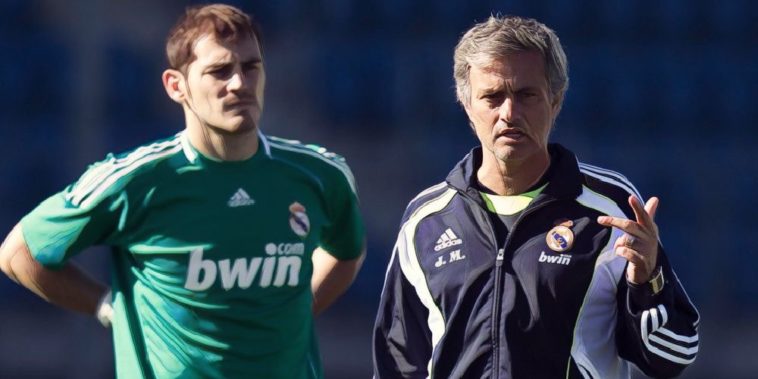 Jose Mourinho is back in English football and it is sure to be a fascinating watch.

The former Manchester United and Chelsea boss has been handed a third opportunity in the Premier League, appointed as Tottenham Hotspur‘s new manager following the club’s surprise sacking of Mauricio Pochettino.

His return will undoubtedly be blockbuster viewing, as throughout Mourinho’s career two things have always happened wherever he has managed: success in the form of trophies and fall outs with high profile players.

A relationship that was once quite close, it soured during the in-fighting towards the end of Mourinho’s tenure in Madrid. Pepe disagreed with Mourinho’s treatment of club captain Iker Casillas (more on that later), stating he felt Casillas deserved more respect and describing the manager’s actions as “not suitable”.

Mourinho perhaps felt Pepe’s switch of sides was the ultimate betrayal, having stood by the player during a number of on-pitch controversies, a player he believed once best represented his own ‘us-against-the-world’ mentality.

Mourinho, in typical sharp-tongued manner, decided to get personal with his Portuguese centre-back. In reference to Pepe’s position and Madrid’s emerging young defender Raphael Varane, Mourinho said: “It’s easy to analyse the Pepe thing. His problem has a name, and it is Raphael Varane.

“I have to try and be honest and think that very few don’t believe that the future of Real Madrid is Varane and Sergio Ramos.

“It isn’t easy for a man of 31 with a lot of experience to be blown out of the water by a kid of 19. It’s very simple. The problem is very simple. Pepe’s life has changed.”

What does the future hold for Spurs under Mourinho?

On paper, it looked like a Portuguese match made in heaven. Mourinho, one of the finest managers of his generation and Quaresma, the mercurially talented winger. It did not work out as hoped.

Famed for his tough love, Mourinho became frustrated with what he saw as Quaresma’s ill-discipline and over-exuberance.

“Quaresma will have to learn, otherwise he won’t play,” said Mourinho.

“I am sure he will change and become more tactically disciplined. Right now he likes kicking the ball with the outside of the foot.”

Quaresma responded by describing signing for Inter as his “biggest regret”. He said: “I felt on the margins of the squad and woke up crying when I had to attend training sessions.”

It literally all ended in tears.

A source of criticism following Mourinho’s arrival at Manchester United, Anthony Martial felt the full wrath of his manager’s insults. Having been unceremoniously dropped following the signing of Alexis Sanchez, his manager turned on the Frenchman (and Marcus Rashford) following a defeat at Brighton.

Having informed Mourinho of his desire to leave the club, tensions rose further between player and coach. Mourinho was also unhappy that Martial decided to stay with his partner following the birth of their child rather than immediately rejoining United’s pre-season tour.

He said: “Anthony Martial has the baby and after the baby is born – beautiful baby, full of health, thank God – he should be here and he is not here.”

Martial, speaking through his Twitter account responded: “My family will always come first”. Their relationship never truly recovered, before Mourinho’s sacking at Old Trafford in December of last year.

Julio Cesar, Mourinho’s number one goalkeeper at Inter Milan, allegedly once received a text from his former manager saying he stopped more shots “with one arm” than Casillas did with two.

A huge presence in the Real Madrid dressing room, “San Iker” was beloved by teammates and fans alike. In 2010, fresh from winning the World Cup with Spain, Casillas was a living Bernabeu legend and things started positively between the pair, but the relationship soon deteriorated.

As captain of the national team, Casillas upset Mourinho due to his closeness with several Barcelona players during the peak of the two clubs increasingly bitter rivalry, and Mourinho wanted him out. Once asked if he would have done anything differently in Madrid, Mourinho said: “I should have brought in Diego Lopez (the keeper that replaced Casillas) after my first year.”

Mourinho’s arrival at Manchester United was supposed to usher in a new dawn following a disappointing period in the post Sir Alex Ferguson-era. Handed a huge summer transfer budget, the new boss opted to splash a world-record fee to re-sign Paul Pogba from Juventus.

Pogba had come through the ranks at Old Trafford before leaving for Italy, but he would return four years later as one of the most promising midfielders in world football and a player in which Mourinho’s new-look side could be built around.

It would not prove to be that way.

Their relationship was fractious, Mourinho demanding more from his star player and stripping him of the vice-captaincy, whilst Pogba would question his manager’s tactics.

The two extroverted personalities clashed on several occasions, their relationship imploding and culminating in Mourinho calling his record-signing “a virus” in a dressing room row just weeks before his departure from the club.

Read: Five managers who famously lost their head on the sidelines